Scientists have been digging in the old Koskobilo quarry in northern
Spain and have found two previously unknown species of spider crabs to
enter into the fossil record. The creatures, found in a fossil reef that
once 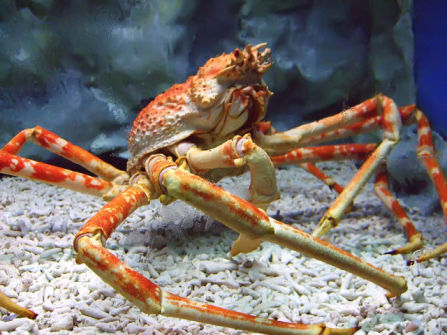 Live Japanese Spider Crab (Photo by Tsarli/Creative Commons via Wikimedia)teemed with life, existed over 100 million years ago, making them
older than any other spider crabs found before.

The previous spider crab fossils that held the record for oldest were found in France and were about a million years more recent than the new find.

The presence of the coral seems to have been a breeding ground for biodiversity and may have been a sort of nursery to support the creation of species.

Evidence from another dig site in a quarry in Germany shows that crustaceans from that period engaged in gregarious grouping behavior may have been beneficial to the survival and evolution of the species at that time. The evidence of this turned up as the fossil of a clutch of tiny lobsters found cuddled together inside a mollusk shell.

The team of researchers also found a new species of hermit crab in the Spanish quarry and named it after Michael Jackson (Mesoparapylocheles michaeljacksoni) because it was found near the time of his death.

Crustaceans
History
News Stories
Science
I Will Cut You! The Crab With A Knife Animal Video Of The Day!!!