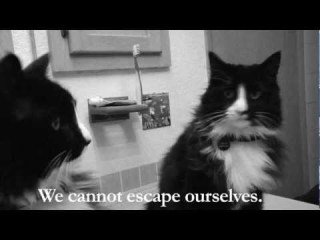 Henri 2, Paw de Deux video: video by William BrandonJust two weeks after the big video cat shindig in St. Petersburg, Russia, the U.S. hosted its own Cat Video Film Festival at the Walker Art Center in Minneapolis on August 30, 2012.  An estimated 10,000 people attended the viewing, but the only cats to be seen were on the big screen.

Thousands of already-viral cat videos were submitted to the competition over a period of a few months. Katie Czarniecki Hill, organizer of the event, and a select group of reviewers, narrowed the number of videos for the show to 75.  All were shown continuously for 79 minutes.

The Golden Kitty Award for the best video went to Henri 2, Paw de Deux (with already 4 million views) and its creator William Brandon, who accepted the award with grace, saying "I don't think I've ever purred this loudly!"

In case, like most of us, you missed the grand cat video event, you can watch them all on The Walker Art Center YouTube Channel.  Once you watch these videos, you may be inclined to vote for your own Best In Show here.

Deck Your Deck Or Garden With Cats And Birdies