Fido & Fluffy Can Donate Blood Too 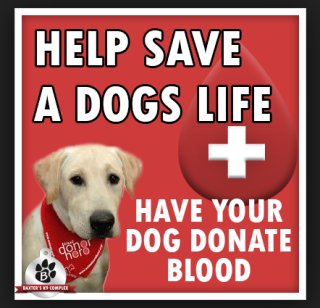 Pet owners don’t just take their dogs and cats to the veterinarians when they are sick. Often, healthy pets can serve as the best aid for other pets who are sick or injured. In Huntsville, Alabama, Dr. Staci Armstrong who works at the Whitesburg Animal Hospital makes a differentiation as to what type of facility do the most pet transfusions: “An emergency clinic probably does more transfusions than we do here, we probably do a handful of transfusions a year.”

Apparently it’s been a longtime practice that few people know about. Most donors at Whitesburg, and many other hospitals, are pets of clinic employees.

Like humans only being able to give blood to other humans, dogs can only donate to other dogs, cats to other cats, and so on. But like us, the donors have to be pre-screened.

The three groups of feline blood types are: A, B, and AB. About 90 percent of domestic cats in the U.S. have type A blood; B is usually found in some of the more exotic purebreds. AB is the rarest type. No one type is a universal donor when it comes to cats.

Dogs that are DEA 1.1 positive can be considered to be universal recipients, while DEA 1.1 negative pooches (60 percent of greyhounds fall into this category) are universal donors.

When our pets need an emergency transfusion, the vet first considers any other pets in his or her clinic at that time that would make suitable donors.

If there are none available, they then start calling on local animal blood banks. Dogs can be regular blood donors if they weigh 55 pounds or more and (if female), are spayed and have never been pregnant. (Pregnancy can add antibodies to the dog’s blood that might cause rejection by the recipient.)

Not as many animal blood banks have regular cat donors, however,  because of their nature, cats have to be anesthetized before they can a transfusion. Luckily, since the majority of felines are type A, if blood is needed, there's usually another cat in the clinic that can be used for a quick fix. Shelter pets can also be considered when they are found in good health.