As someone who sees a variety of cute and bouncy little anoles every day, I couldn’t help but to get excited to see that this large-nosed lizard managed to “get over” extinction! 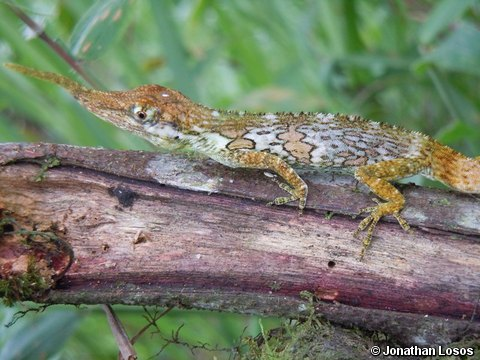 The Pinocchio lizard, clearly named for its wooden exterior and inclination to be untruthful, was recently discovered to be alive and well in the jungles of Ecuador. As odd as the nose-horned lizard is, the real meat of the story is that these lizards were thought to have been extinct since the 1960’s. After one was sighted in 2005, a crew of researchers and photographers went on a three year search to document the rare reptile. Now that the Pinocchio lizard has been documented to exist in the wild, they have been upgraded to the title of “endangered” since they have only been found in four remote locations, giving it the smallest range of any known lizard.

Note that the large horn on the lizard’s snout only develops on male Pinocchio lizards and that its main purpose is to showcase its quality genes to its prospective lizard mates. Other than the exotic nose, these lizards are probably similar to the other anole species of the Americas: they’re small, consume a variety of live invertebrates, are common prey to a variety of local carnivores, and they are simply adorable.

Sure, anoles are territorial and aggressive towards each other, but you can’t help but to smile when you see a tiny lizard trying its best to act tough by doing itty-bitty pushups! Congratulations on not being “extinct” anymore, Pinocchio lizards! Let’s hope that there are many other cool animals like you that scientists have overlooked as extinct too!