Escape Of The Condor: Panic On Ice

When the National Anthem is played at the beginning of a sports event it
is supposed to be a solemn moment of patriotic reverence. For the
Bakersfield Condors hockey team it is also when their mascot, a live
condor, is 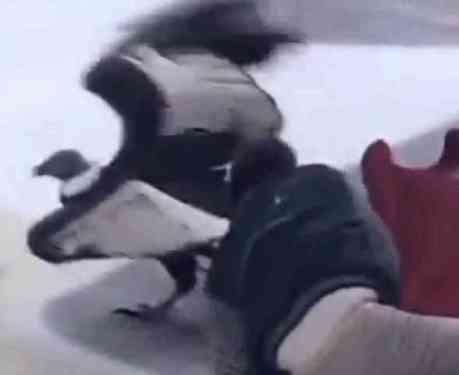 Condor Mascot Escapes Handler (You Tube Image)brought out, introduced to the crowd, and placed on its
perch. At their last game things didn't go quite as planned and the
result was several minutes of utter chaos.

It all started when the condor made a bid for freedom and escaped its handler. The handler quickly recaptured the bird and continued the walk to center ice. That was when the handler slipped and fell on the ice, losing his grip on the mascot a second time. The condor made a run for it again, slipping and sliding across the ice toward the team bench.

The bird flew up to the railing, sending team members dodging, unsure of whether they should be amused or terrified. For a group of men known for getting into brawls on the job, they were oddly intimidated by the condor. Some of the players ducked out of the bird's way while others climbed over the fence onto the ice to escape..

The condor finally made its dramatic exit down the tunnel to the locker room. Apparently on this day it really just wasn't into team spirit and gave the whole flock of them the bird. Somehow the referee never did call a "fowl."