After months of watching, making introductions, and research, the Smithsonian National Zoo welcomed its first pair of fishing cat newborns. The cats, native to southern and southeast Asia, are considered endangered as their population has dropped by 50 percent in the past 18 years, due to degraded and settled wetland habitats in their habitats, as well as commercial fisheries loading up on their prey. 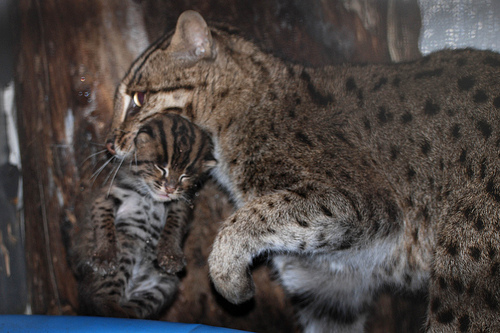 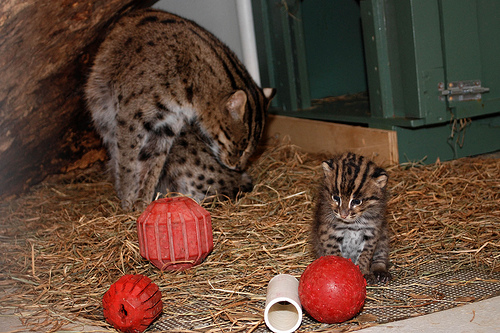 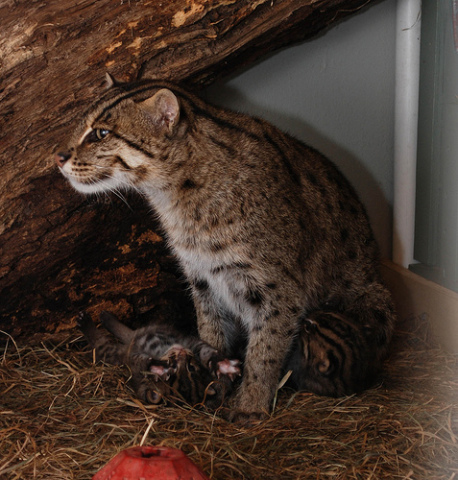 Yes, the cats are great fishers and, in the wild, they get most of their
nourishment from fish that they trap near river banks, streams, and
swampy shores or dive for.  Fishing cats are also naturally great swimmers; one might say they swim 'like a fish.'

Successful breeding has been tricky in captivity, so the National Zoo and the Association of Zoos and Aquariums is celebrating the birth of the now month-old fishing cats, hoping they will learn more about strategies to assist in the mating of fishing cats.  They've been studying genetic information as well as behavioral clues that might help further successful births.

The National Zoo has three adult fishing cats, two males and one female, Electra.  At first Electra was paired with one of the males, but the two showed no interest in each other.  When the second male, Lek, was introduced to Electra, they eventually started showing signs of affection, grooming and nuzzling each other - all seen by researchers via closed-circuit camera.

The camera is also watching developments in the cats' den as, except for Lek, who'll be let out for Father's Day on the Asia Trail, the cats will keep to themselves for at least a few months.

Smithsonian Around The Mall, Wikipedia

Color Me In Love With Animals
PetsLady's Pick: Sweet Winnie-The-Pooh Of The Day
Comments