'Edward Snowden' Of The Animal Kingdom Also Found On The Lam

When "Snowden-and-Rusty" turned into a Twitter meme over night, folks quickly thought that Edward Snowden might have had an accomplice. As the former government contractor charged with leaking top secret national security information, Snowden was the perfect foil for Rusty the red panda who escaped from the National Zoo in Washington, DC on June 24. 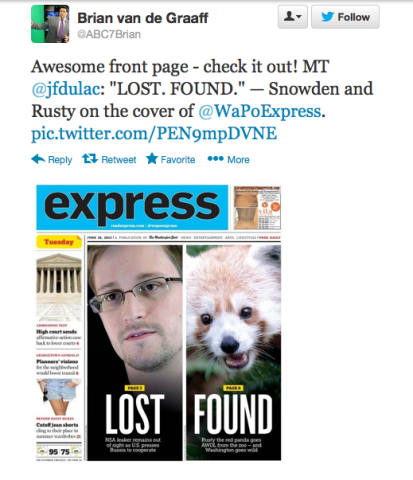 As Rusty became the second most famous fugitive on the planet, an all-points bulletin went out to secure his capture. The public was also alerted to "exercise caution. . .(because) if cornered, Rusty could bite." I'm not sure if similar warnings were attached to Snowden's all-points bulletin!

In an attempt to draw other comparisons between the now infamous Edward Snowden and Rusty, David Clinch, executive editor at Storyful, suggested that perhaps Rusty's was also "up to no good."

In a tweet, Mr. Clinch fueled the 'Snowden-and-Rusty' meme: “Has anyone photo-shopped a picture @RustyRedPanda into 17a on Aeroflot flight yet?” – referencing the seat that was reserved for Snowden on the Moscow-Havana flight (which ended up never taking place). 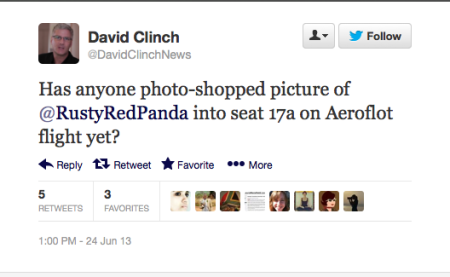 To which Bryan MacDonald in a responding tweet noted the someone named "Vesti" in "Moscow just said that he (Rusty) has left Russia." 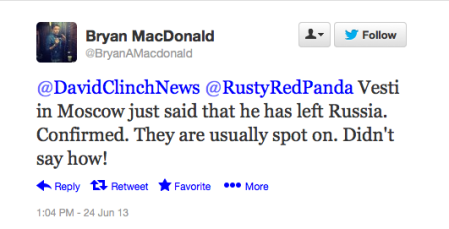 In actuality, Rusty never made it to the airport, even though I reported earlier this week that "Panda-monium" did break loose when a dozen or so oversized pandas were found on a British Airways flight en route to Chendgu, China (but that's another story). 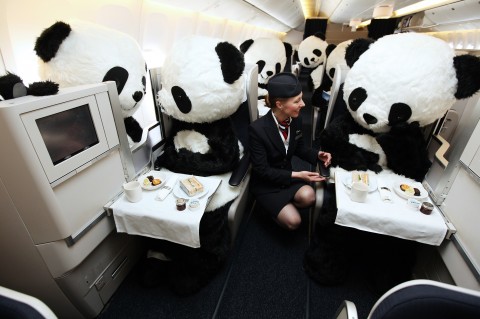 Rusty, on the other hand is a no fool for publicity stunts. And while his escape was surely not predicated on leaking top secrets, Rusty might have had good reason to bolt from his zoological habitat. Since the zoo was planning on breeding him with a female red panda named Shama, there is speculation that he may not have bought into the whole idea of an 'arranged marriage.'

According to Linda Feldman, staff writer at the DC Coder, "maybe it wasn't working out between the two -- just like Snowden's girlfriend, who got left behind when he fled Hong Kong."

As far as comments from inside-the-beltway, predictably, zoo-lover Newt Gingrich covered himself in case the finger was pointed at him: “In response to red panda charges, I have an alibi,” the former House speaker and presidential candidate tweeted. “Callista and I were feeding our pet elephant all evening."

President Obama, on the other hand was in the loop on all status updates regarding the apprehension of "said escapee." While it's not easy to escape from a secured location within DC, apparently one whistleblower and one little red panda seemed to have figured out the 'Houdini' secrets! 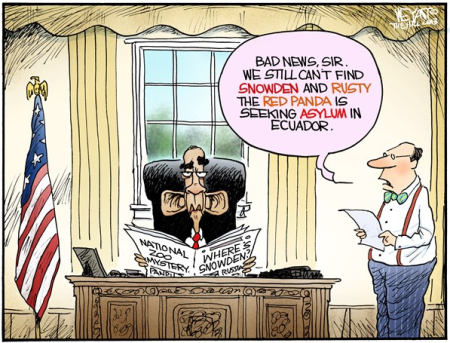 Let's Take A Ride To Crazy Town! The Animal Video Of The Day!!!

Parrot And Bunny Toy -- The Best Friends Animal Video Of The Day!!!

Twinning With Your Best Friend
When Giraffes Attack! The Animal Video of the Day!!!
Comments