People who like to talk about how smart dogs
are now have more proof than ever. Over the course of eight weeks, an
animal shelter in New Zealand
has managed to teach three of its rescue dogs how to drive a car. 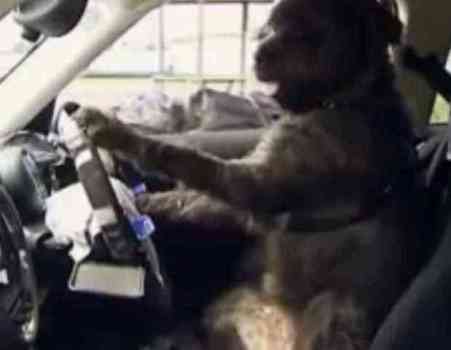 Monty the Dog Driving a Car (You Tube Image)Granted someone else needs to buckle the seat belt for them, but it is
still a pretty amazing feat.

Monty, Ginny, and Porter were selected to learn the feat for a live test drive on television next week. The Society for the Protection of Animals in New Zealand is hoping that the "stunt" will help raise the profile of rescue dogs in the country and increase adoption rates.

Monty, a giant Schnauzer mix, was given up earlier this year by his owners who said he was too difficult to control. Seeing Monty training to drive a car one can't help but wonder if it was his owners who were badly in need of training.

This is not a trick. the dogs actually are driving the car. Previews of the television show have been meeting with a lot of positive feedback from the public.

While not every rescue dog is cut out to be a chauffeur, this program goes a long way to prove that shelter dogs are not second-rate, damaged goods. Adopting a shelter animal can be your avenue to the best friend you've ever had.