Most of us treat our dogs like they're members of the family. Since they can't talk back, there are 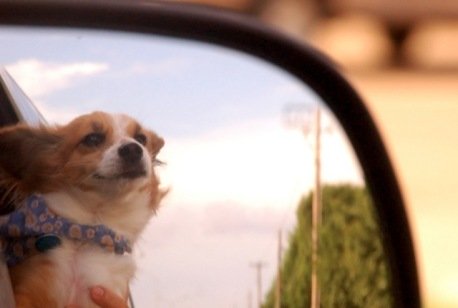 dmoments where they're treated even better than the humans in our lives (though we're often reluctant to admit that). Unfortunately, not everyone thinks the way that we animal lovers do, and as we approach the hottest part of the year for most of the country, reports of dogs locked in cars are popping up all over the place.

There's no denying that dogs love being with their people, and their unconditional love is almost addictive. It's also pretty hard to resist their excitement at the front door when they're vying to hop into the car and stick their heads out the window so their tongues can flap in the breeze. It's practically traumatic to walk out of the house and shut the door in the face of your hopeful pup when you're a pet owner. As animal lovers, we also understand each of these things.

However, we know better. We recognize that leaving the dog at home could be lifesaving, and for whatever reason, hundreds of people fail to join us. Even with the best of intentions, that quick stop at the grocery store while the dog waits in the car can turn into a much longer errand. Lineups might be long, a chatty neighbor might appear, or remembering forgotten ingredients could lead to picking up a cartload of groceries. That few extra minutes a dog is left alone has the potential to severely harm its health.

(video shows a dog being rescued from a hot car)

People may feel that they can justify their decision to leave their dog in the car on a warm day, but that reasoning is irrelevant when the dog ends up with heat stroke (or worse). So what is an animal lover to do after encountering a dog left in a hot car?

1. Take the time to educate yourself on local laws

It's all fine and well to hit share on an image on Facebook that says you'll smash in a window to rescue a dog from a hot car. But that time could be more wisely spent educating yourself on what local laws actual allow you to do as a good Samaritan. After all, you probably don't want to face huge fines or prosecution.

Information outlining "police suggestions" circulates on social media constantly. One of the most recent posts indicates that rescuers can use an app to take a picture of the dog, and the app will validate the time and outside temperature. The claim is that by doing so, you are protected if you smash the window to remove the animal. The image fails to include any information that supports its legitimacy, and mentions no location/jurisdiction. Rumor has it that a UK police force made the statement but it has not been formally validated. 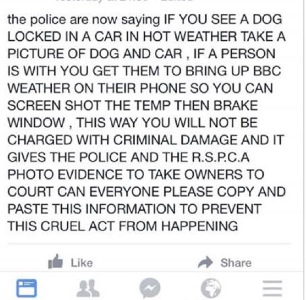 Simply blindly following this as though it applies locally could get you into trouble you weren't expecting. Each state and many cities have their own laws and regulations on this subject, so check with them. If you're the type that's prepared to start breaking some glass in the name of dog safety it's wise to have this information before an urgent situation arises.

Some resources suggest trying to find the owner yourself before contacting the authorities. But, the longer you delay calling the cops or SPCA, the more time the dog could spend in the car with their health declining rapidly if you can't locate the owner. Instead, make the calls immediately - if the SPCA can't respond promptly, then you'll want to have the police on hand as well. Having an officer present also offers legal protection, especially if they choose to take matters in their own hands and break into the vehicle when it's deemed necessary. You can still try to locate the owner after you've made the calls, just ensure you provide a detailed description of the vehicle and its location.

If the car is parked at a shopping area (which is the most common place dogs are left in cars), go into the stores and let customer service or the cashier know that there is a dog in distress. Provide them with descriptive details and ask them to make an announcement over their loud speaker (if applicable), or speak to customers coming through the checkout. If the dog owner gets the message that their animal is in distress, they might return to their vehicle faster.

The condition of the animal is what will help you decide if more drastic measures need to be taken - within the confines of the law or not - to save its life. According to the American Veterinary Association, cracking a window in a car does little to keep a dog cool. But, it can still be beneficial, as you may have the ability to manually push the window down from its exposed edge. Naturally, this is assuming that you've already checked for an unlocked door or trunk. If you leave the vehicle, have a friend remain or ask another concerned citizen. 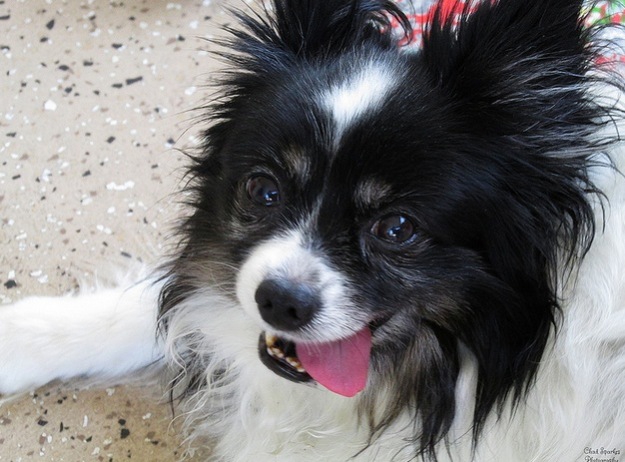 In order to bring the dog's body temperature down and rehydrate them, water, wet towels, and even ice should be on hand. The SPCA may come prepared with supplies, but even a responding police officer may not have the necessities. Also, come up with a cool, air conditioned environment to bring the dog into once it's removed from the car. Source and gather each of  these things before the authorities arrive, and before urgent action needs to be taken. Then no matter what, you're ready to try and nurse the animal back to health.

If you decide to take matters into your own hands when all else has failed, take pictures of the condition of the vehicle and the location/condition of the dog before doing anything else. If you decide to smash the window, protect your arm from broken glass by covering it was a towel or clothing item. Protect the animal as well by breaking a window as far from it as possible (while still allowing access).

Now that you've read through these tips and guidelines, tell us, what would you do instinctually when confronted with a situation like this?

UPDATE: if you live in Tennessee, you now have every right to break the window to rescue a dog as a good Samaritan. This chart by Michigan State University's Animal Legal and Historical Center outlines the legalities regarding leaving a dog in a hot car, and what you can legally do to help.