Dog Now A Regular At Mass After Owner's Death

Tommy, a German shepherd, used to attend church services regularly with his owner, Maria Margherita Lochi.
When she passed away two months ago Tommy followed the coffin to the
church for the funeral service. Since 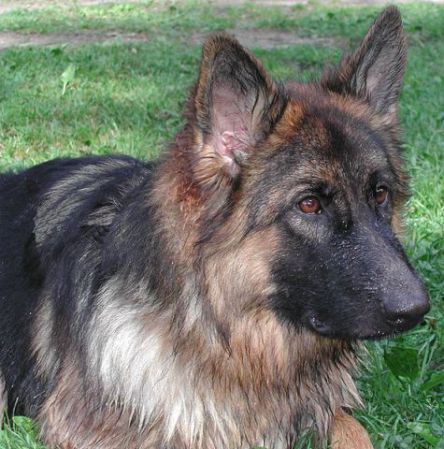 German Shepherd (Public Domain Image) then when the bells of the church
are rung to announce daily Mass, Tommy shows up to join the parishioners.

The priest, who recently lost his dog, doesn't have the heart to show Tommy the door. Tommy comes in, walks to the front of the church and sits down by the altar for the entire service. He is polite, respectful, and quiet for the whole time. None of the parishioners ever complain about his presence.

Tommy was a stray that Lochi had adopted. She had found him abandoned in the fields near her home. Although she had also adopted other strays, it was Tommy that she was particularly close to. While Lochi was still alive Tommy was permitted to attend Mass with her while sitting quietly at her feet.

While Tommy doesn't currently have a permanent home and it would be nice if he could find a place to hang his heart again, he will never be stray. The entire village now cares for him, giving him food and water and the occasional bit of shelter. Attending Mass is obviously a way for him to continue to feel Lochi's presence in his life. Perhaps he also senses a need in the priest for a dog to fill the empty space in the holy man's heart after the loss of his own canine companion.

13+ Pet Themed Doormats With ATTITUDE! Which One Best Suits Your Dog Or Cat?

Chickens Wearing Tutus Showing Up In Your Dreams? Those Are Not Dreams!
Things You Don't See Everyday: A Raccoon Surfing An Alligator
Comments