Dog Doggedly Makes It Home In Spite Of Serious Injuries

Ruby, a black Labrador retriever in Cumbria, England, was missing for
several hours. When she finally turned up at home again she had
apparently been hit by a car and dragged herself 500 yards to get back.
She was in 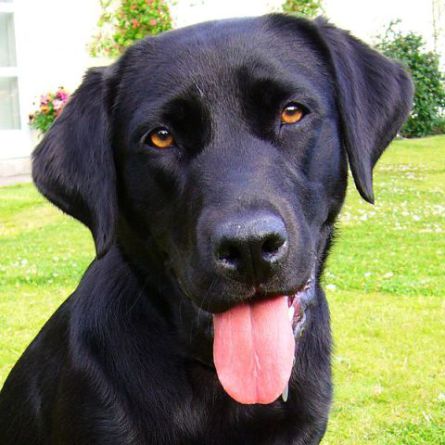 Black Labrador Retriever (Photo by ChristianBier/Creative Commons via Wikimedia) a tremendous amount of pain, but when her owner, Tom Iredale,
rushed her to the veterinarian for emergency treatment, she still
wagged her tail to say hi.

A quick set of x-rays showed that Ruby had a dislocated hip and several fractures to her lumbar spine. In most cases the spinal fractures result in paralysis, but somehow Ruby had retained movement to her legs and tail. Four hours of surgery were required to rebuild Ruby's lower spine and hip. A combination of bone screws and titanium plates were used to put the dog back together. With no damage to her spinal cord, Ruby's prognosis is excellent.

Iredale, who was faced with choosing the expensive surgery or having Ruby put down, is glad to have his best friend back at home, despite the £4,500 bill. When he went to pick her up she was already walking and well on her way to health.

Ruby is doing well enough that she is even expecting a litter of puppies this summer.

Surprise Her With A Bouquet Of Corgis!
Can Moco Lucero Really Register To Vote?
Scam Alert: Fraudulent Website Tricks Consumers Into Thinking They’re Flying Their Pets With Delta
Comments