Did You Miss National Pet Day?

What pet owner doesn't know the importance of the date April 11th? Well, that's National Pet Day, founded by celebrity pet lifestyle and animal advocate Colleen Paige to not only appreciate our four-legged friends, but to create awareness about the thousands of animals waiting for homes across the U.S. So, if you missed the official holiday, there's always the present to show your existing pet a little love, and perhaps even consider visiting a shelter to acquire a new one. 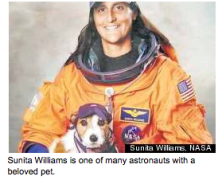 But not every space traveler animal gets to live at the home of an astronaut. A lot of them have also journeyed throughout space themselves. Dogs, chimps, rats, even spiders have

Albert IIorbited the planet -- and many of them, like Russia's celebrated "space dog" Laika, the first animal to orbit the Earth, performed first-time space feats long before man. Albert II, a rhesus monkey, went to space in 1949 - 12 years before Yuri Gagarin became the first human in space.

Iranian Space MonkeyIn one of my previous posts titled, "Cold War Rivals Take Back Seat To Iran's Space Monkey," this past year Iran took the lead with animals in space. On January 15, according to Tehran's state TV, the rocket dubbed "Pishgam," or "Pioneer" in Farsi, reached a height of 120 kilometers (72 miles), pushing into the threshold of space.

Elsewhere, rescue operations brought awareness to the forefront on National Pet Day. “There are two main things you can do to help the animals in this country,” explains Robert Misseri,

president of Guardians of Rescue. “First of all, always adopt your pets, rather than purchasing from stores or breeders. Next, support the organizations that are doing the hands-on work of helping animals.”

One campaign that not only recognizes pets but also their communities is The PEDIGREE® Adoption Drive. More than just honoring your pets one day a year, this global organization which launched in 2005 by the PEDIGREE®  brand recently introduced their PEDIGREE® Feeding Project.

Miranda LambertThis initiative determines by votes which community in the country to benefit. In turn, the shelters in that community receives 100 percent of their core dog food needs, at absolutely no cost. Here dog lover and Grammy award-winner Miranda Lambert provides an overview of this year's finalists and the voting process.

Hope your National Pet Day was a singularly rewarding one for not only you, but more importantly, your pet. Did You Miss National Pet Day?

JetBlue Offers $299 'All Your Pet Can Jet' Fares To Fly Through The Holidays!
Catnip Attracts Most Kittehs, Also Repels Mosquitoes
Comments