To date, I've posted several stories pertaining to animals in the workplace. But today, I focus on the creative genius of Young & Rubicam NY whose imaginative TV commercial titled, "Meet Thomas: Creator of an Alternate Universe." In a touching one-minute vignette, this agency unfolds a Walter Mitty type of tale about a commuter who daydreams about writing the Great American graphic novel.

Similar to Mitty, Thomas is a meek, mild-mannered business man who conjures up  a vivid fantasy life populated my human-like animals who appear to have shape-shifted into a toad, rabbit and bird.

Ironically, while Dell tried to appear hip a decade ago, with the popular TV ads and slogan, "Dude, You're Getting a Dell," today the computer company is the butt of tech jokes from a younger generation that have gravitated towards the hipper Apple and Samsung products. And with their recent acquisition by Gateway 2000, Dell seemed to be stuck in a time warp of a by-gone era, no longer relevant.

This commercial is an attempt to turn that perception around. With Thomas creating an alternate universe on a XPS 12 Convertible Touch Screen Ultrabook with Adobe software, he is able to anthropomorphize his toad, rabbit and bird. As they come to life and share his commute, Dell released a series of "making-of" videos, which explains how the animal creatures were developed, and again reinforces their appeal to a younger demographic.

Here you can go behind the scenes and get a glimpse at the making of The Toad:

Dell also invites the viewer to explore the Touch Screen Ultrabook, which flips from a laptop to a tablet,  and can be found on Dell’s website. The “Meet Thomas” spot, directed by Bjoern Ruehmann, continues the series of ads, which also included “Meet Billy: The Boy Who Captured the Stars” and “Meet Annie: The Girl Who Could Fly” videos, highlighting “The power to do more” message. They were released in 2012 and also promoted the Dell products to a younger generation of romantic dreamers who have the capability of turning their dreams into reality.

But none of last year's campaigns in this series can compare to the Harry Potter-esque look and feel of the animals creatures in "Meet Thomas," let alone the stampede of mice riding grasshoppers who race alongside the commuting train at the end of the 1 minute spot. It's pure genius and worthy of a CLIO award, I'm sure! 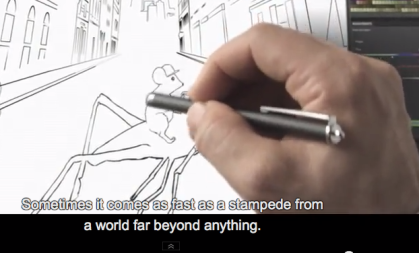 Horse-Drawn Plows Back In Favor At French Vineyards
Meet Mali: A Canine Hero From The United Kingdom
Comments