The Curious Case Of The Purple Squirrel

To paraphrase the old poem by Gellett Burgess -- I've just seen a purple squirrel, I never thought I'd see one, but I can tell you now and sure-ell, I'd rather see than be one. Well, here is your chance to see one. A
couple 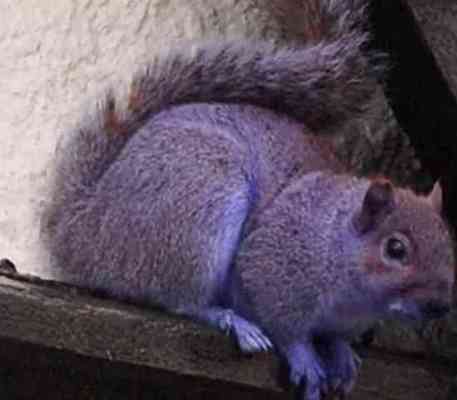 Purple Squirre (You Tube Image) in Pennsylvania managed to trap one earlier this year to prove
that they do exist. Whether the squirrel is a natural purple is still up
for debate.

Back in February, Connie Emert was just the most recent in a string of people in the United States who had seen a purple squirrel. Her husband, Percy, didn't believe her -- neither did anyone else. Then Percy trapped a purple squirrel by accident. He routinely traps squirrels and releases them elsewhere to keep them from getting into the Emert's beloved bird feeders. They have no knowledge of why the squirrel is purple.

For a couple of days they kept the squirrel while all the neighbors stopped by to see it for themselves. Then they released it back into the wild at an undisclosed location. The Pennsylvania Game Commission said that they are not going to go out looking for the squirrel.

Everyone has their own theory on how the squirrel ended up purple. Inks, dyes, paint, and even falling into a port-a-potty are among the theories floating among the armchair scientists. Krish Pillai, a professor from Lock Haven University explained that the color looked much like Tyrian purple, a natural organobromide compound seen primarily in mollusks but is extremely rare in land animals. It could mean that the squirrel had somehow managed to get hold of too much bromide.

Reports of purple squirrels go back to 1997 and range from Minnesota eastward to the United Kingdom. There has been no explanation of the sightings, and there is nothing on Snopes one way or the other.

"Purple squirrel" is also a term used by corporate recruiters to refer to the impossibly perfect job candidate.