Garden gnomes, flamingos (both plastic and real) and wind chimes are all normal lawn décor in Florida, so the nine-foot American crocodile nesting on a Monroe Country resident’s front yard stood out like a scaly sore thumb.

The huge female crocodile was discovered nesting in the front yard of a south Florida home early on April 23rd, only after it laid 27 eggs on the property. The Fish and Wildlife Commission quickly arrived on the scene to relocate the crocodile to a more secluded location and to remove the eggs. 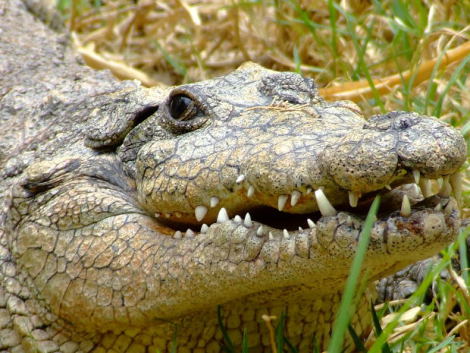 American crocodiles were once endangered and were fairly rare in Florida, but due to strict protective laws, their population has rebounded. In 2007, the United States Fish and Wildlife Service downgraded its conservation status to “threatened” to reflect the resurgence of the species. While there has never been an official American crocodile attack on a human, we can only assume that there will be more interaction between Floridians and wild crocodiles as they continue to thrive.

Check out this CNN video for more about the 2,000+ crocodiles that call my backyard home: