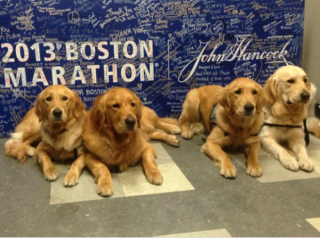 Golden Retrievers Maggie, Addie, Luther, Richie and Isaiah are Boston's hometown heroes - even though they haven't taken up residency. These five canines are trained 'Comfort Dogs' or what some call "Therapy Dogs." Their unique role aside from being man's best friend is to visit various communities in the aftermath of tragedies. And while they're trained like 'Service Dogs,' this particular group focus on providing emotional support.

Since last year's trip to the Boston Marathon site to provide the survivors and injured with some much needed TLC, over the course of this last year -- they've been to a dozen or more towns throughout the U.S.

According to a Buzzfeed post, they’ve visited West, Texas, where 15 died after an explosion at a fertilizer company. They traveled to northern Arizona, where the Granite Mountain Hotshots lost 19 in a fire. They’ve visited the Rockaways, in Queens, N.Y., where residents had still felt the effects of Hurricane Sandy. They went to Oklahoma after two devastating tornadoes, and Colorado after their deadly floods. They also were honored guests in the beloved Labor Day parade in Newtown, Conn. And they’ve been back to Boston twice — in May, a month after the bombings, and at the six-month mark in October.

“The dogs work for about two to three hours at a time, and then we make sure to give them a break,” noted Lizzie Brose, a handler for the K-9 Parish Comfort Dogs. “They really do absorb the feelings of the people around them.”

According to the reports, a dozen dogs reside in the K-9 Parish, which is based at a Lutheran church in Chicago. This isn’t the only comfort dog group in the country, but it is the most popular unit, and the only one that travels extensively around the country. Other comfort dog groups typically work closer to home and work locally out of churches, hospitals, and universities.

This past week, after visiting patients at Tufts Medical Center in Boston, the dogs were stationed on the porch of the First Lutheran Church — a half-mile away from the marathon explosion site. They were petted and embraced by dozens of passersby and treated like the royalty they are.

“I saw the explosion, and as one would be, I was incredibly shaken up,” said Nick Holmes, an acting student at Emerson College. “But I saw online yesterday that the dogs were going to be at the Lutheran church, and I was like, ‘I know what I’m doing after class tomorrow.’ Because I need this.”

Comfort dogs are a blessing and our heartfelt thanks go out to the dedicated trainers that prepare these dogs for their very important mission in life.

The Best Way to Pick Up Chicks: Walk Your Dinosaur! The Animal Video of the Day!
Comments