Colonel Meow, the popular Internet cat, was just named the World's
Hairiest Cat by Guinness World Records. The two-year-old
Himalayan/Persian mix has accounts on Facebook and Twitter, and maintains
his own website and a YouTube Channel. His owner, Anne Marie Avey,
explains that this is all a part of his plan for world domination.
Indeed, it seems that the only other cat that even comes close is the
ubiquitous Grumpy Cat. 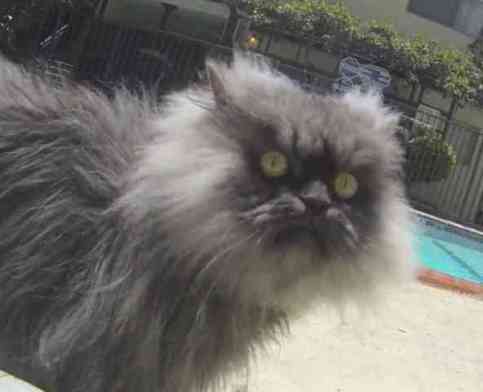 Naturally it would be a cat looking for world domination. While there are dogs out there on Facebook and Twitter, with websites, and dozens of videos on YouTube, it seems that they are more likely to be satisfied with the love of millions. Some cats just want adoration and control.

Colonel Meow was blessed (or cursed) with a great deal of very long fur. In an ironic twist of nature, cats with long fur have shorter tongues than their short-haired counterparts. This can make grooming a bigger chore for them. Avey helps keep him well brushed both to assist him with his grooming and to try to keep the amount of fur he sheds from taking over their home. 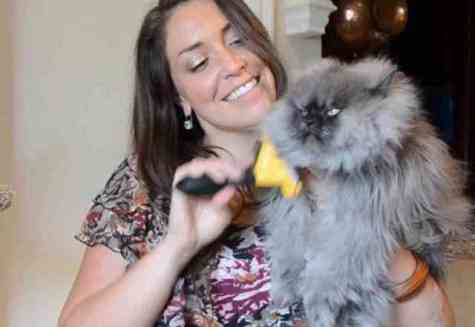 Colonel Meow and Human Mom, Anne Marie Avey (You Tube Image)To be given the Guinness honor three independent vets each had to measure ten hairs from Colonel Meow's coat and come up with an average length. The results were then submitted to Guinness for review. As it turned out, his fur length was an astounding nine inches.

Meow now resides in Southern California with Avey, his human mom, and Eric Rosario, his human dad. You may not be able to tell from his scowl, he enjoys the laid-back lifestyle and often suns himself poolside. It is just the right venue for a rising star.

Avey has commented that she feels like she is always vacuuming to keep up with Meow's shedding. There has been no comment of the size of the fur balls that this cat must deal with. On the Today Show Al Roker joked about Colonel Meow's fur balls, imagining them to be the size of the boulder that Indiana Jones had to escape in Raiders of the Lost Ark.

The 2014 edition of the Guinness Book of World Records will be in stores on September 14. Colonel Meow's record will be formal then and even more people will come to recognize his natural greatness.

This Mailman is Quite Brave -- The "Being Hunted" Animal Video of the Day!!!