Cat lovers have long known that cats are a wonderful form of
entertainment, but they have also long held the belief that cats can't
really be trained. For Yuri Kuklachev, founder of the Moscow Cats
Theater, any cat can be trained to do amazing things, they just need to
be active and willing to please. They all have natural ways of moving
and acting that can be worked into talent. 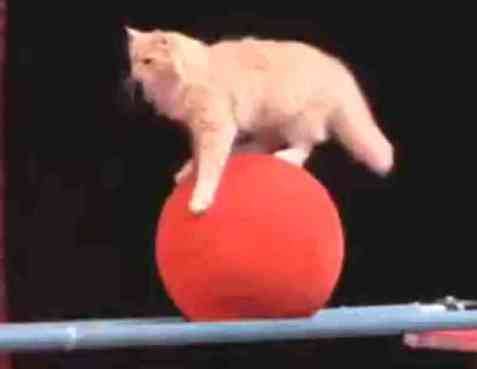 Car Walking A Ball Across Parallel Balls (You Tube Image)

Kuklachev and his son, Dmitri, started the theater in 1990 and have been entertaining crowds of cat lovers ever since. With a troupe of performers that include 120 cats (and 4 dogs), the theater makes a point of bringing orphans, wounded veterans, and the disabled in to see their performances in addition to the regular paying audience members.

The theater had been closed for a year for needed renovations and just reopened in April 2013. It is billed as the only cat theater in the world. 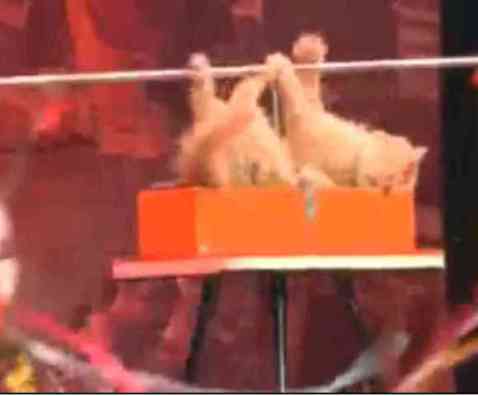 Cat Twirling A Baton (You Tube Image)Naturally the theater has drawn a lot of serious criticism from People for the Ethical Treatment of Animals (PETA) for forcing the animals to perform "uncomfortable and unnatural tricks." They cite such activities as performing with lit torches and pulling a toy baby buggy as being among those tricks.

Though the cats appear happy and healthy, when the theater went to Germany a German PETA official examined the show and urged people not to attend.

The cats walk tight-ropes, pose on mirror balls, twirls batons, perform on and with balls, take part in skits, and do aerial feats. Even in the available videos, cats will be cats and will wander off if they aren't agreeable 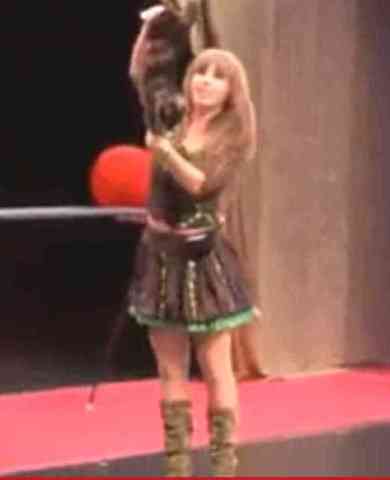 Cat Doing A Handstand (You Tube Image) to what they are doing. They reportedly will also spontaneously refuse to do things or suddenly ad lib their parts. The cats obviously love the humans they perform with.

Many of the cats are former strays that have been rescued by Kuklachev. He watches the cat for a while to determine what the animal's natural movements and traits are and then begins building on them for what kind of tricks the cat would take best to.

While this life isn't right for every cat out there, it certainly seems to agree with these precious kitties. While PETA claims that the felines are driven by fear, it hardly seems likely. It is reported that Kuklachev manages his cats with soft words and a gentle hand -- something cats are much more likely to respond to.