Celebrities and Their Pets: Where Love Lies

Fame and fortune are fleeting, but friends and family nourish our hearts for the duration of our lives. Friends come in all sizes and shapes; some with two legs and some with four. Some sport feathers and others fur (usually one or the other, but these days, who knows?) Many celebrities travel with their pets whenever possible, whether out for a walk  in the park or a royal strut down the red carpet. They share  every part of their lives. Consider some of these best buds from the past and present.

Old Time Celebrities and Their Pets 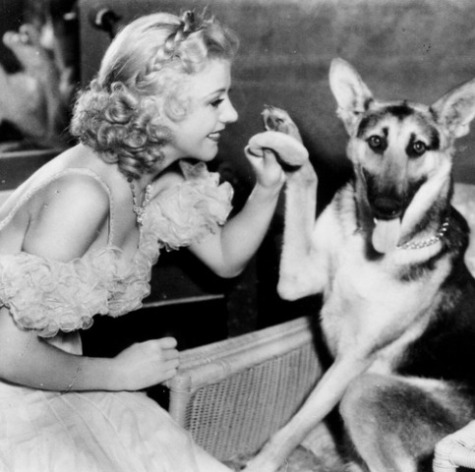 Dubbed by Time Magazine  in 1941 as the "flesh and blood symbol of the American working girl," Ginger Rogers made 73 movies, one for which she won an oscar (Kitty Foyle) and 10 musicals in which, encased in satin, feathers and chiffon, she swirled across the dance floor paired with the inimitable grace and style of dancing partner extraordinaire, Fred Astaire. When she died in 1995, she left a small menagerie of pets that included: a poodle, a beagle and three cats. Above she is seen with her pet shepherd. 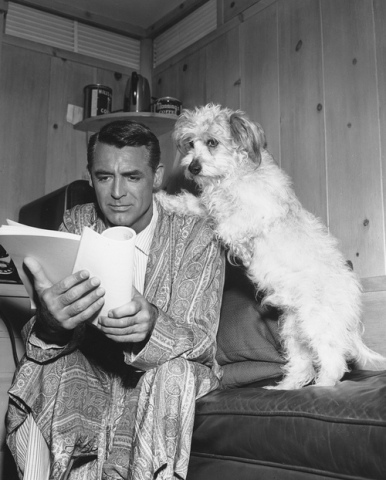 This handsome English heartthrob began his life as poor Archibald Leach, who was performing as a juggler at the tender age of 13. Cary Grant made many films over the course of his more than thirty-year career. He enjoyed a quiet life, surrounded  by the people and animals he loved. Above  he is depicted reading a script with his favorite dog, Sealyham Archibald. Tabloids of the day claimed the dog ran away from his Los Angeles home while  he was carrying one of his wives (Virginia Cherrill) across the threshhold. He took large ads out  to get the dog back. 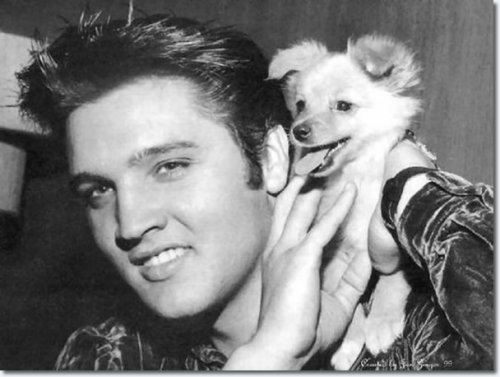 The "king of rock and roll " was an avid animal lover who had  many pets  when he lived at his Graceland estate. At one time, his private menagerie included: several monkeys, a henhouse filled with chickens, horses, peacocks, goats, pigs, turkeys, poodles, a Great Pyrenees dog named Muffin and a chow named Get Low, who outlived Elvis by one year. He also gave dogs as gifts to the women he loved; a dog named Sweet Pea (featured above) to his beloved mother, Gladys, and a poodle named Honey to his wife, Priscilla. Although not particularly fond of cats, he did have one he called Wendell, named after Wendell Corey, his  co-star in Loving You. 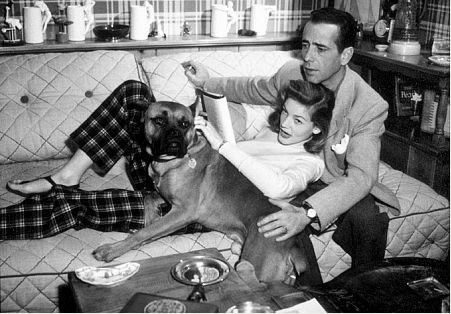 The Bogarts and Harvey: Source:Pets4ever.org

The Hollywood love story of their time, the couple met in 1944 on the set of To Have And Have Not  and despite a twenty- five year age difference, their twelve years together (1945-1985) were happy ones for both of them, sharing among other things, a passion for dogs .Althought they owned a wide array of breeds, only the Boxer would dominate their lives after they received a wedding  present of a week-old puppy  from Pulitzer Prize-winning author, Louis Bromfield. "We named him Harvey," said Becall, "after the invisible rabbit." They soon acquired two more dogs, George and Baby, who shared their California estate along with 14 chckens and 8 ducks. Harvey was the favorite, and he loved Bogey until the end, surviving him by just one month. 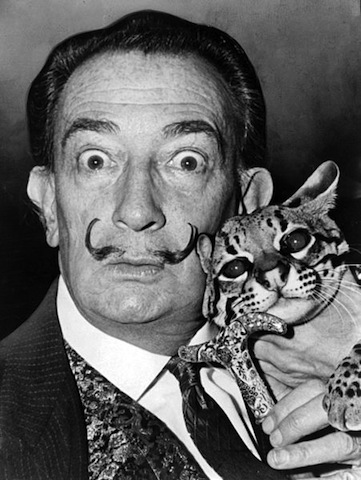 Spanish artist and Surrealist icon,  Salvador Dali is perhaps best known for his 1931 painting, The Persistence of Memory  depicting clocks melting in a landscape setting. Eccentic to the nth degree, he  claimed his curved moustache was an antennae that received signals from aliens and that his wild and very vivid dreams were prompted by eating large quantities of Camembert cheese before retiring.

His choice in pets was equally quirky;  a Columbian ocelot named Babou, who decked out in studded collar and leash, accompanied Dali wherever he went. He once brought the cat into a Manhattan restaurant and tied it to his table. To appease the frightened diner at the next table, he told the woman that Babou was just a normal cat that he had "painted over in an op art design"

Today's Celebrities and Their Pets 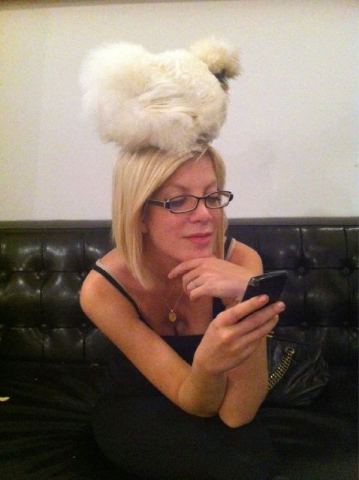 Daughter of producer, Aaron Spelling, and  award-winning actress, author and mother, Tori Spelling is also a passionate animal lover. She loves her own pet chicken, Coco Chanel, who sleeps in a Sherpa-lined dog bed next to her own bed. She told the press that chickens make the best pets and that Coco is a lap chicken that loves people and traveling with her family. 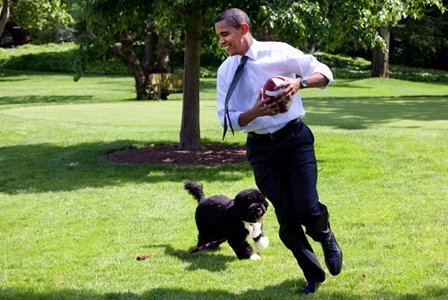 On Election Night 2008, President Obama  publicly promised his daughters that they would get  a puppy when they officially moved into the White House. He kept his word and after months of speculation about the  breed and identity of their future pet, they decided on a Portuguese Water Dog because daughter, Malia, suffered from allergies. On Easter Sunday, 2009, the Obama family received the dog as a welcoming gift from Senator Ted Kennedy and his wife, Vicky. In August 2013,  Bo was joined by Sunny, a female Portuguese Water Dog.

HIlary Swank With Karoo and Rumi 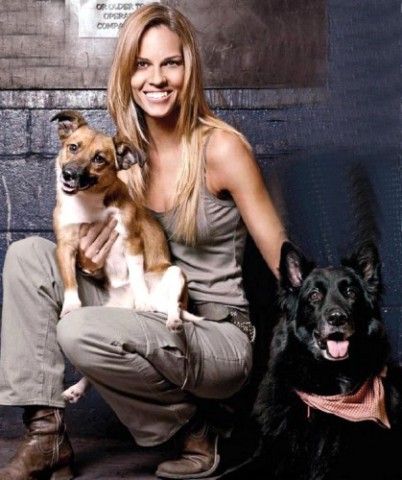 The youngest woman in history to win two Academy Awards for "Best Peformance By An Actress in a Leading Role," Hilary Swank is a devoted pet owner and avid supporter of animal rights. She and her husband, Chad Lowe, support a household shared by many animals that include: a black cat named Duece; Rumi, a Golden-Retriever  mix; two parrots and her beloved Karoo, a Jack Russell /corgi mix.

She and the four-year-old mutt crossed paths while she was filming Red Dust on location in the desert town of Karoo in South Africa. The poor dog was starving and in terrible physical shape, but now lives a life of luxury as a pampered pet. Karoo accompanies Hilary to fashion shoots and movie sets and even appeared in one fo her films (Million Dollar Baby).

Oprah Winfrey and her Pets 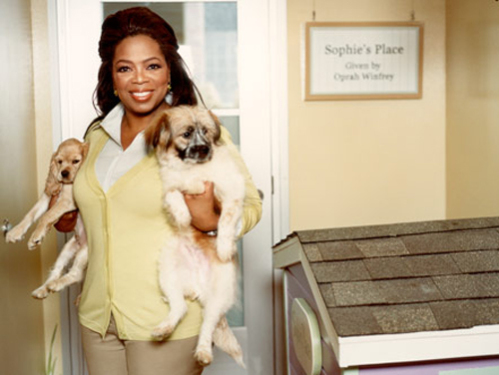 Oprah is an avid animal lover and activist and has owned many pets over the years. She even featured some of them, particularly her Cocker Spaniels, Sophie and Solomon, on her daytime show. Solomon was a loving dog, a one-of-a- kind" in her own words, who was a 1994 Christmas present from Stedman Graham, her long time lover. For fourteen years until his death in 2008, Solomon traveled by Oprah's side all over the world. His death was a devastating blow and irretreivable loss. In addition to Sadie, Oprah is currently mom to Golden Retrievers, Luke and Layla, and Springer Spaniels, Sunny and Lauren. 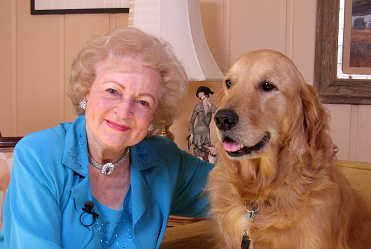 A lifetime animal lover, Betty White  was inducted to the Television Academy's  Hall of Fame in 1995. During the 1960s she appeared frequently  on variety and game shows and was a regular with Jack Paar, Merv Griffin and Johnny Carson. She has won six Emmys for her various television roles, the most famous of which was as homemaker, Sue Anne Nivens, on the Mary Tyler Moore Show. But far more than her brilliant career as an actress/comedienne, Miss White lives a life devoted to animals and animal causes. She is featured above with her pet dog, Pontiac.

Celebrities love their pets unconditionally just as we non-celebrities do. Our pets are great buffers against lonlliness and fill  gaps in out lives that are immeasurable. No matter how diverse the trappings, true love reigns whenever an owner  bonds with the pet of his or her choice.