Rumors have been flooding the internet that a herd of cattle in Texas
was killed by genetically modified grass. The truth is that the grass,
Tifton 85, is a hybrid, not a GMO. However, it is true that the grass was
tested and was found to be producing cyanide. 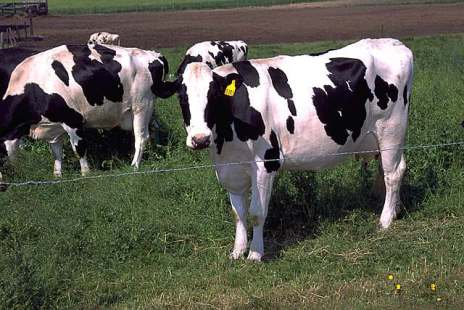 A few weeks ago an 80-acre ranch in Elgin, Texas was the scene of a horrifying tragedy. A herd of cattle had recently been released into the pasture both owned by Jerry Abel. Abel had been turning cows into that same pasture with the same grass for the past 15 years. It should have been another perfect summer of grazing.

When bellowing was first heard coming from the field it was thought that the pregnant heifer was giving birth. When they went to check on her they found that they couldn't have been more wrong. Some of the cattle were already dead, others were in convulsions. In a short time 15 of the 18 cows were dead.

Other ranchers in the area have started testing their grass and have received the same results -- the grass is producing cyanide. The USDA is on the case and the deaths are under investigation. One of the possibilities that they are considering is if the recent drought in Texas somehow played a part. They are also looking into any chance of a spontaneous mutation that may have occurred. (Sources: CBS, Examiner.com)

Tifton 85 is a Bermuda grass hybrid that is high in hydrocyanic acid which may be concentrated during drought.  The hybrid grass first started being used experimentally in the late 1980s and prized for its improved nutritional value, high dry matter yield, and drought tolerance. Genetically modified plants were also entering into limited experimental use at that time. (Sources: Tifton, Wikipedia)

Hybridization is vastly different from genetic modification. A hybrid is a cross-breed of two "parent" plant species that are related to select for the most desired traits of both. This has been going on for many centuries and makes use of the natural reproductive processes of the plants. Genetically modified plants are created by either injecting non-related genetic material, including those from animal sources, into the plant material and then cloning the result, or by introducing the new genetic material into an organism via bacteria. (Source: Rodale)

While the grass on other ranches have also tested positive for cyanide, no other cattle deaths have been reported. It is not yet known what truly happened. Until it is understood how and why the grass began producing cyanide, the field is being left to the grasshoppers. Well, at least as long as they live.