They say that truth is stranger than fiction. For one little cat in
Milton, West Virginia this is certainly true. The tiny tabby was trapped
in a house when it caught fire. Nearby Batman and Captain America were
visiting a group of 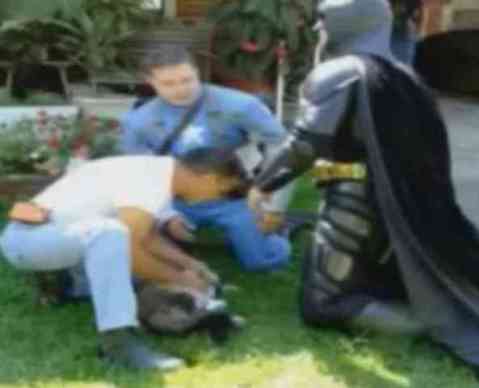 Batman and Others Helping a Cat Rescued from a Burning House (You Tube Image)children to talk with them about what it means to be
a hero. The kids were witness to something that they won't soon forget
as the fictional heroes sprang into action for the real-life emergency.

The pair ran
to the house and broke down the door, then broke a window to clear the
smoke. They began to search for anyone who might have been overcome
inside. That was when Batman felt something furry beneath his hand. He picked it up and carried it outside. There he gave the animal mouth-to-mouth resuscitation.

Batman, or rather John Buckland, was a firefighter in a previous life. He and Captain America (Troy Marcum) are now partners in Heroes for Higher, an educational program that inspires kids to "be the hero." At events like the one being held that day at the local American Legion Post the kids are taught the four qualities of heroes: a hero always does the right thing; a hero never gives up, a hero helps other; a hero never touches drugs. Their mission is to change the world one child at a time.

As you can imagine, the firefighters arriving to find the caped-crusader and Captain America already on the scene were a bit dumbfounded, especially when they witnessed Batman giving a cat mouth-to-mouth. It was certainly the call-out of a lifetime and something to tell the grandkids about.

The cat was not exactly appreciative of the super hero help it received. It hissed at Buckland and reportedly took a swipe at him. But wouldn't you do that too if you woke up to see a giant bat bending over you with its mouth open?

The homeowners were out of town and the cat was the only one at home. It is still unknown how the fire started. The one thing that is certain is that Batman and Captain America rescued the cat and saved the day.