Cat Catches The Tube In London

Last Friday London commuters were amazed when a stray ginger tabby
walked onto a train on the "Tube." He hopped onto a train to Battersea
at the Seven Sisters station. He found himself a seat and settled in for
the 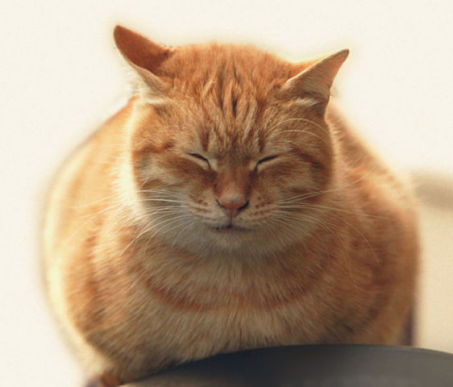 Ginger Tabby (Photo by Tennen-Gas/Creative Commons via Wikimedia)journey. His fellow commuters stared at him in shock and surprise.
After all, it isn't every day that you see a cat riding the subway!

Luckily for the wayward moggy (British slang for "cat") had chosen the same train car as a volunteer from the Battersea Dogs and Cats Home. More than that, she just happened to have an empty pet carrier with her because she needed to pick up her own cat from the vet.

Paige Jokovic said that it was so unbelievable that she thought it was a lost teddy bear at first.  Once she recovered her wits she realized exactly what she needed to do. With infinite patience she coaxed the animal into the carrier. From there she took him to the rescue organization where she volunteers.

The people at the shelter named the little guy Oyster. His arrival had coincided with the organization's campaign to increase awareness of their cat adoption program.  The campaign includes late night "Purrsdays" every Thursday night so that people can come in to check out the available moggies until 8 p.m.

Most of the cats they take in are not in such good condition so they think that he has not been on his own very long. Since Oyster is a happy, healthy stray they are hoping that his family will come to collect him. If no one comes forward to claim him they will find him a new home where he won't need to get around on the Tube anymore.

Cats
Cute
News Stories
Rescue
Wear Your Cat Love On Your Chest
KatKabin: Your Kitty’s Vacation Home!
Grumpy Cat To Be Immortalized At Madame Tussauds
Thanks To Donations "Boneless" Cat Will Walk
Comments