Camels Breaking Their Backs For Obama?

No, this isn't a campaign slogan. In biblical times, we knew the answer. But today, one might ask: What's harder than a camel going through the eye of a needle? It has to be the recent reward placed on Barack Obama's head by Somalia's al Qaeda-allied Shehab rebels. In response to the US offering $33 million for the whereabouts of several Muslim leaders, Somalia turned the tables on us with a bounty of 10 camels to anyone who could help locate Barack Obama.

"Godane"In a Pakistan Today report, the US State Department upped the ante on Shebab chief Ahmed Abdi aw-Mohamed (aka "Godane" and Sheikh Mukhtar Abu Zubayr) to $7 million. Typically, a male brown camel can be worth up to $7,000 and females can go as high as $20,000. That means the mock offer for information on the president's "hideout" equals between $70,000 and $200,000—which is $6,800,000 less than what the United States is currently offering. So that's where our tax dollars are going?

Previously, it appears the US also used "camels" as a form of bounty hunter currency. One hundred

"Shongole" camels were offered to motivate spies and counter-spies to find Prophet Mohammed (PBUH) when he fled Mecca for Medina not too long ago. Shehab leader Fuad Mohamed Khalef (aka "Shongole") indicated " there is nothing new in the fact that infidels pay to have muslim leaders killed…the dollar is the camel today."

Then to underscore the mockery of these types of rewards, Khalef added tongue-and-cheek: “Whoever informs the mujahideen fighters of the place where Obama can be found will get 10 camels and for US Secretary of State Hillary Clinton, we will offer 10 roosters and 10 hens.” 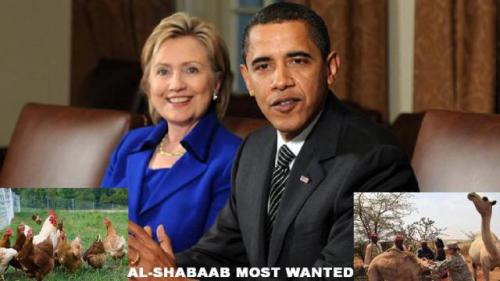 Clinton & Obama with their respective bounties
With the bounty on Secretary Clinton's head, MyPetChicken.com puts the price of a hen at $25. A rooster will cost you roughly $3.00. That comes to a grand total of $280 for information leading to the capture of Hillary Rodham Clinton. No reports released yet whether or not this "chicken feed" offer has deflated our Secretary of State's ego.

The State Department did however issue a statement announcing the reason for the bounty on seven Shebab leaders. This was based on “the group (being) responsible for the killing of thousands of Somali civilians, Somali peace activists, international aid workers, journalists and African Union peacekeepers”.

Whether these tactics in and of themselves even come close to being the straw that broke the camel's back, the war in in Somalia ravages on. While the Shebab continue to dominate the larger regions of southern Somalia, African Union troops, government forces and Ethiopian soldiers have recaptured several key bases from the insurgents in recent months.

As far as Obama "wanted dead or alive," one has to wonder if the Somalians are watching the current presidential elections and if their bounties act as a barometer as to who might win. After all, if they even had an inkling that Mitt Romney had a chance to become the next leader of the free world, wouldn't that have anted up another 10 camels for him as well? And if they really thought he had a shot might they not have even doubled the offer?

Oh, but then again, we all know that a "rich man" has a harder time going through that eye of a needle -- so that might have been the deal-breaker that disqualified the Governor of Massachusetts from having any camels placed on his head! 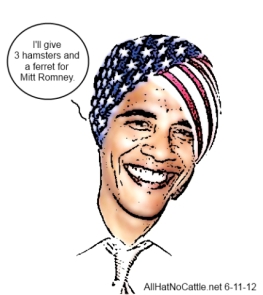 Just Carrots For Me, Thanks. The Casual Animal Video Of The Day!!!

PetsLady's Pick: Funny Back To School Lioness Of The Day
Comments