Five farms in North Carolina that raise turkeys for the famous
Butterball Turkey brand have come under fire for allegedly engaging in a
regular pattern of abuse in the raising of its turkeys. Mercy For
Animals released a hidden camera video on Wednesday that shows workers
at these farms kicking, stomping, dragging and 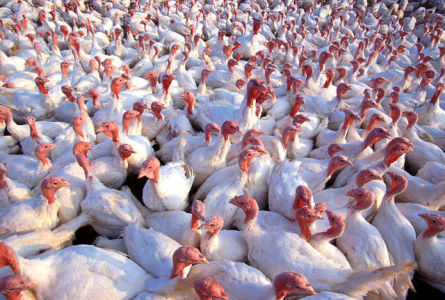 On their website the group said that the birds on these farms suffered from open sores, broken bones, as well as a variety of infections. These latest allegations are coming on the heels of what seems to be a pattern of abuse among the Butterball farms in North Carolina starting in 2011, which has resulted in job losses and fines for those employees convicted of animal cruelty.

Butterball claims that it has a zero-tolerance policy when it comes to animal abuse and has begun its own internal investigation. They promise to take action against any associates found to be violating this policy.

Butterball accounts for 20% of turkey production in the United States and employs 5,000 in 5 different plants.