Of all the animals you might imagine escaping from a zoo, sanctuary, or
other animal exhibit, an octopus would probably be pretty far down on
the list. Sure, it has eight legs, but is lives in water. And yet,
earlier this month Inky the Octopus managed to escape from the New
Zealand National Aquarium and made it back to the ocean. 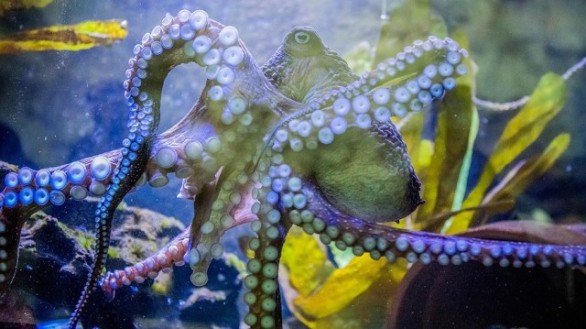 Most people don't realize just how intelligent octopuses really are (and no, it's not octopi for the plural). Researchers have found the creatures being capable of completing many complex tasks. I once saw a video of one such facility where they couldn't figure out what was happening to their crabs at night. The researchers would arrive in the morning to bits of shell being the only evidence that there had been crabs. They set up a camera and found that the octopus in another tank would go out at night, climb into another tank, feast on the crabs and then return to his own tank. It was amazing.

Octopuses are also capable of changing their exterior to camouflage themselves to look like the rocks or reefs they are hanging out around. It makes a great way for them to avoid predators and sneak up on their prey. Watch this:

In this case Inky managed to concoct an escape plan that took him out of his aquarium through a small hole (or a lid that was accidentally left ajar) at the top, then across a wet floor to a drainpipe that reportedly led to the ocean. He waited until nightfall to make his move and by the time the staff d in the morning they realized that they were missing one cephalopod.  No search was made for Inky since they were sure that he had made it out to sea.

They don't believe that Inky had been unhappy in his tank. They said that he was a very curious critter and he most likely not escaping but just taking off to look around. They have also ruled out foul play. Their security is strong and Inky apparently left his "prints" across the floor.

The aquarium staff has not given up on Inky. It is entirely possible that the friendly and interactive creature may get lonely for his human friends and find his way back home. Now that would make for a really incredible story.

Make It The Day Of The Giant Turkey

Save Your Change In A Puggy Bank