To see what a wonderful airing kids and cats make you only have to
look as far as You Tube. In Berks County, Pennsylvania you can just look at  the Animal Rescue League. There they have a volunteer program
called "Book Buddies" that recruits children from first through eighth
grades to come in and read out loud to the cats. While the cats are
comforted and soothed by the sound of a kid's voice, the kid's reading
skills are improved. 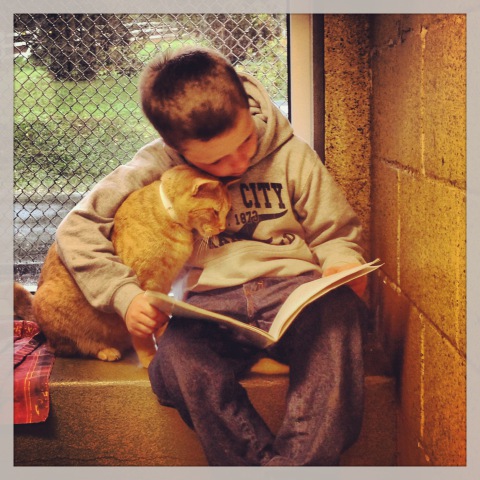 Colby, one of the Book Buddies, and furry friend (Photo via Facebook)

The popular program is open to any child who can read and has been an immense success. It has been proven to be a blessing for both parties in the deal. The children, in addition to improving their reading skills, are showing more interest in school and learning. At the same time the cats are getting the additional human interaction that they need and the staff is too busy to provide. It is a win-win all the way around. 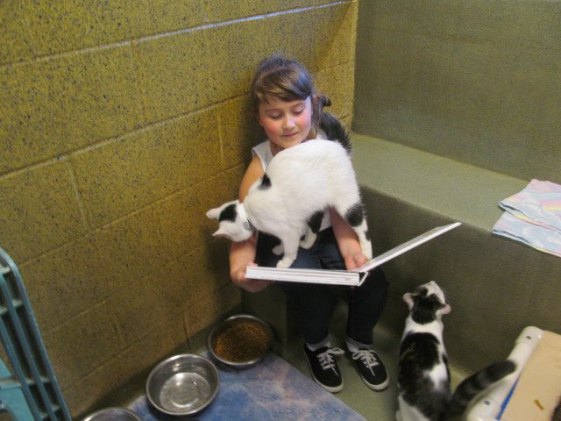 Cassandra, one of the Book Buddies, and furry friends (Photo via Facebook)

The photos of the kids reading to the cats have been travelling the internet and the Animal Rescue League has received donations from all over the world, including Istanbul, a city known for its love of cats.

There are other peripheral benefits going on as well. For example, Cheyenne Boyd has some issues with being afraid of animals and going to read to the cats at the shelter is a nice, laid-back way for her to spend time with animals and feel their gentleness. 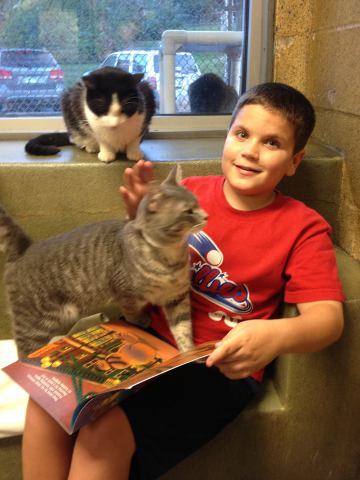 Aidan, one of the Book Buddies, and furry friend (Photo via Facebook)

The program started in August 2013 after the League's Program Coordinator, Kristi Rodriguez, had an inspiration on how to help her son, Sean, who was struggling with his reading skills. She brought him into the shelter and had him read to the cats. He loved it so much that he asked to come back. Since then he has shown a huge improvement in reading and now reads to the family dogs at home. His success inspired the formal program. 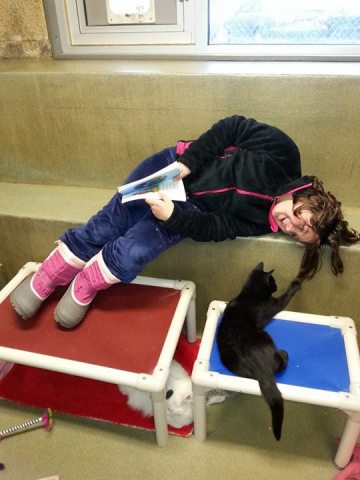 Isabel, one of the Book Buddies, and furry friend (Photo via Facebook)

Book Buddies has become an extremely popular program with home-schooled children, Brownie troops, and autistic children. The non-judgmental, non-evaluative response of the animals provides feelings of support and comfort to the children as well.

This isn't the only reading program at a shelter. At the Bitter Root Humane Association in Hamilton, Montana, kids come in to read to both dogs and cats. It is part of the Keystone Discovery Enrichment after school and summer program for at-risk youth. Some of the kids keep choosing to come back week after week to read and love. 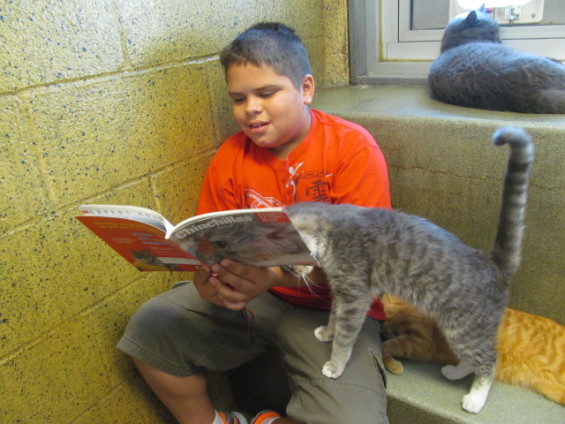 Of course, reading isn't the only thing going on in these programs. The kids and animals also take time to play together and share a whole lot of love -- to the benefit of both.

Cats
Cute
Fun
News Stories
Rescue
Hilarious Pet Tweets Of The Week #160404
Walter And The Awful Pawfuls Rock It Out For Smelly Cats [Videos]
15 Cutest Critters Sure To Warm Up Your Thanksgiving
Keep Your Hands Warm With The Predator vs. Prey Mittens
Comments