This past year has been a great one for gray squirrels across the
nation. Their population has grown to record numbers due to the ideal
weather conditions from last year's warm winter, which also produced
banner crops 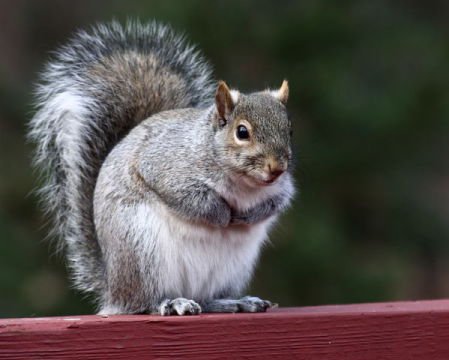 Gray Squirrel (Photo by Sage Ross/Creative Commons via Wikimedia)of nuts and seeds to feed the expanding population. The
East Coast, Northeast, and Midwest have been especially hard hit by this
cute and furry little menace.

While squirrels are an adorable favorite among neighborhoods across the United States, they cause huge headaches in the form of crop damage to farmers and gardeners, chewing through electrical wires, and stripping bark from trees. They also carry rabies, plague, and ticks infected with Lyme disease which can be transmitted to humans.

To curtail the gray squirrel population, experts feel that birth control is the best option. Since IUDs and condoms don't come small enough and would be difficult to get the little rodents to use, the next best option is an oral contraceptive. That still leaves the problem of getting the squirrels to pop a pill everyday -- which just doesn't seem likely.

Decades of research into birth control for other species has shown that injections work well for animals such as white-tailed deer. One shot and they are good to go for years. However, at a cost of $50 per squirrel to trap and dose hundreds of thousands of squirrels, this plan is prohibitively expensive and time-consuming.

The treated seeds are pink and probably taste a little sweeter, but the squirrels don't seem to mind. The treatment and research will continue for another year before a final determination of its efficacy. The pink dye stains the squirrels' belly fur pink to identify them as test subjects so that they can continue to be observed.

There is a certain irony in a country considering providing squirrels with birth control where so many people are against providing contraception to the human population.