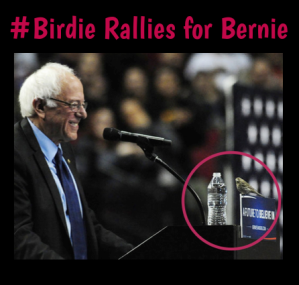 The political season this year in the States has been one big super non-ending dose of ‘Reality TV.’ Nobody could have scripted what Americans and the world at large has laid witness to over the course of the last six months — and there doesn't seem to be any end in sight. From Trump’s ‘the Emperor’s wearing no clothes' raucous sideshow act to establishment stalwarts like a a Bush family member being kicked to curb, viewers and voters would have to attest to the unique entertainment value in this political field.

But up till now, very little has been written about pets and animals  — and who if put to the test might be their preferred choice for Leader of the Free World. After all animal rights is an important issue for any aspiring candidate.

In one of my previous posts titled, Who Will Be the Next PPOTUS (Presidential Pet(s) of the United States)?, I did cover the top contenders pets, at the time. However, the majority of them favored dogs. There wasn't one bird lover in the bunch!

‘Birdie’ to the Stump

Well, that’s all about to change. While there’s no documented evidence that Bernie Sanders owns any pets, it does appear, there is one bold little bird who appears to have a major crush on the septuagenarian. At Bernie’s most recent Portland rally, this YouTube video amazes both the crowd and the candidate himself, when a very self-assured bird lit on his podium.

NPR, the first news media outlet to break the story, noted, “Bernie's evident delight, the crowd's roaring applause and the tiny bird's savoir faire were social media gold. The moment prompted a Twitter response that was completely opposed, in content and tone, to, well, the other big political conversation on social media right now.” 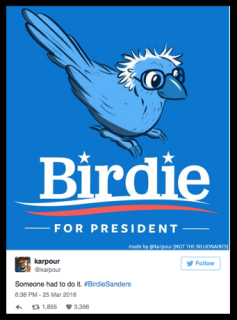 Today, not only is #BirdieSanders still trending but so is the abbreviated version #Birdie. And this is all due to Austrian artist Thomas Novotny (aka Karpour), who tweeted this poster with the following message on March 25: “Someone had to do it. #BirdieSanders” — which at the time of this posting had already been retweeted 1.9K times, garnering 3.4K likes.

Karpour who self-describes himself as a “cartoon artist, programmer, 90s tech enthusiast, trampoline aficionado, acrobat (and) likes trampolines” created the original art initially for the Twitter tweet only, but as of this post, and due all of this popularity, he has most recently had it transferred to t-shirts, which he's selling online at RedBubble.

Interesting to note, that the locale of this rally made this avian event event more poignant.  Portland, Oregon is the location of IFC’s sketch comedy TV show Portlandia, starring Carrie Brownstein and Fred Armisen, who most recently were famously behind another viral event that many have now tied to the #Birdie phenomenon.

In a comedy bit they called “Put a Bird on It," the duo used a ‘bird’ as the latest animal du jour for folks to fawn over in both the real and

virtual worlds (similar to how cats gained our zeitgeist years back.) So the phrase “Put a Bird on It” is meant to be uttered for anyone placing our feathered friends on any item, especially those that are ‘handcrafted’ or ‘thrifted.’ As defined on the Urban Dictionary, “Whether it’s a necklace or a t-shirt or an iPad cover or corset, it could probably use a bird on it.”

Who was that Political Bird?

While no one has yet been able to name the exact species of #Birdie, videographer Teresa Mahoney was able to get up close and personal with it, when she photographed it perched on her camera.

Readers, if you can identify the genus of this bird, please do comment below. And seeing that he appears to be favoring the Democratic side of the ticket, we can only assume that Bernie Sanders will need to add some bird advocacy campaign promises to his next stump speech — so he can keep #Birdie as his very own surrogate going forward.

So, Hillary how are you going to top that one? You have to admit, that's one tough act to follow!