Be On The Alert For Highly Contagious H3N8 Dog Flu Virus 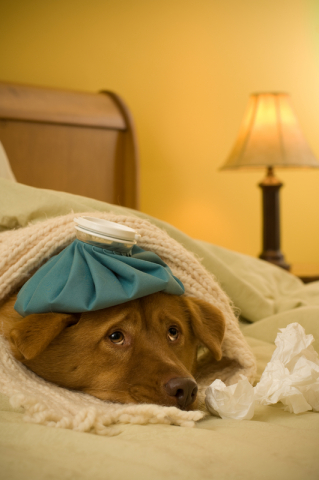 Tissue box suddenly empty?  It just could be that your dog has been blowing her nose in those tissues and stashing them somewhere.  After all, she doesn't want you to alter her lifestyle just because she has the dog flu...

But you will have to change her lifestyle so as not to infect other dogs. Seriously, the signs and symptoms of canine flu, H3N8 strain, are very similar to our own when we get the flu... runny nose, coughing, and high fevers. It can last for 5 to 15 days and, like human flu, dog flu is very contagious -- but only to other dogs. As with human flu viruses, the canine flu can lead to pneumonia and can be fatal, but those cases are not typical.

The canine flu has an interesting history and course of contagion.  The first cases were found in a few racing greyhounds from Florida in 2004, after one greyhound was tested and was found to have equine flu while being boarded in New York.  Scientists were surprised that the equine flu had jumped species but, after all, equine flu was a variant of the bird flu.

Since then, what has established itself as the canine flu, has shown up spottily around the country for months at a time before it disappears from a region and crops up somewhere else.  Currently, for example, there are outbreaks in Colorado, New York, New Jersey, and Pennsylvania, but the dog flu has shown up in more than 30 states all together, sometimes repeatedly after a series of inactive flu months. 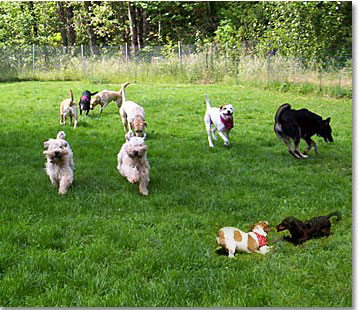 Dog flu is most prevalent among shelter dogs, those who board or are kenneled, and those exposed to other dogs, at play in dog parks or at show events.  Though the canine flu does not infect humans, humans may be carriers of the disease through our clothing or hands that have not been washed, for example.  Dog flu can be caught in the poshest of pet resorts and the shabbiest of dog kennels.

This summer, a canine flu vaccine, developed by Intervet/Schering-Plough Animal Health, became available through veterinarians. The vaccine may or may not prevent your dog from getting canine flu if exposed to it, but will reduce the symptoms and probably the length of the disease if your dog happens to get it.  And if he does, keep him away from other dogs for two weeks to be safe.

According to the American Veterinary Medical Association, "Dogs that may benefit from canine influenza vaccination include those that receive the kennel cough (Bordetella) vaccine, because the risk groups are similar."  Dog owners who frequently socialize their dogs or who plan to board their pets should seriously consider vaccinating their dogs just in case....  And pay special attention to whether or not canine flu incidences are reported in your area. (To do this, check HealthMap, under "other animal diseases," or contact your veterinarian.)

Cat Diet Requirements: Feed Them For Longevity
Some Drug And Alchohol Rehabs Are Allowing Pets To Assist The Recovery Process
Robotic Dog 'Jennie' Supports The Elderly