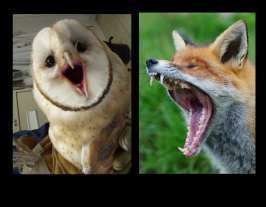 Bats, black cats, crows and spiders often get the bad rap for the creatures most likely to scare on Halloween. But are they the only ones that go bump in the night sending chills up and down your spine? Or are there others just as menacing and worthy of scaring the heck out of trick 'n treaters, young and old?

James Owen from National Geographic says, “for a real scare on Halloween, try listening to the wildlife at night,". . . (like) the red fox (Vulpes vulpes) who's been compared to Jack the Ripper roaming dark-lit streets. "The screams of this wild city-dweller can seem disturbingly human.”

“Occasionally, someone thinks they are the sounds

made by someone in distress or being attacked and the police are called,” says Stephen Harris, a biologist at the University of Bristol, U.K.

According to the university's recent research study, Harris described two types of piercing fox yells where one strangely enough is used in their mating ritual versus to frighten predators away.

The abrupt and explosive “scream” is an aggressive male warning to rivals, while the “shriek,” on the other hand, is a more complex and interactive call used by both sexes, but especially by females to attract mates.

“The noises are very much a feature of urban nights in winter,” says Harris, and not just because foxes are more vocal during that time of year. “The cold air and lack of vegetation means that [their screams] travel further.”

In labeling them ‘barn’ owls, we are mistaken in thinking these birds of feather are friends to farmers by protecting their barns. But not necessarily the case . . . since young barn owls are known -- for some uncanny reason --  to save their spooky screams for right around All Hallows' Eve, when they first start seeking and calling out to their mates.

English naturalist Gilbert White, writing in the 1780s, said the owl’s cries had whole villages “imagining the church-yard to be full of goblins and specters.”

“The thing with barn owls is that they fly silently so you have no idea when they’re flying towards you,” says Jo Plant of The Barn Owl Trust, a U.K. conservation non-profit based in Ashburton, England. “The scream will come out of nowhere.”

“I have had people say to me they thought it was a woman screaming,” she adds.

See in this video, if you don’t agree?

Quite unlike the hoots we associate with most other owls, barn owls are like something out of an Edgar Allen Poe gothic tale.

Ghostly pale and strictly nocturnal, barn owls are silent predators of the nocturnal world. Lanky, with a whitish visage, chest, and belly, and buffy upper-parts, this owl roosts in covert, quiet places during the day. By night, they hunt on buoyant wing-beats in open fields and meadows.

So, this All Hallows' Eve, a word to the wise . . . stay away from red foxes and barn owls . . . as, they can scare the beejesus out of most trick 'n treaters -- guaranteed!

Animal Videos of the Day
Foxes
Fun Stories
News Stories
Owl
Mythical Creatures That Were Real! The Animal Video Of The Day!!!

Squirrel Learns to Purr When Adopted by Cat! The Animal Video of the Day!!!
Comments