Life started out rough for Barley the opossum. When he was still just a
baby he was the sole survivor of a terrible traffic accident that killed
his mother and seven siblings. A passing motorist kindly picked up the
tiny orphan and took him to a nearby veterinary clinic. Once he was
there he was going to be euthanized until one of the vet techs stepped
in and adopted him as her own. Now it is like he has won the possum
lottery. 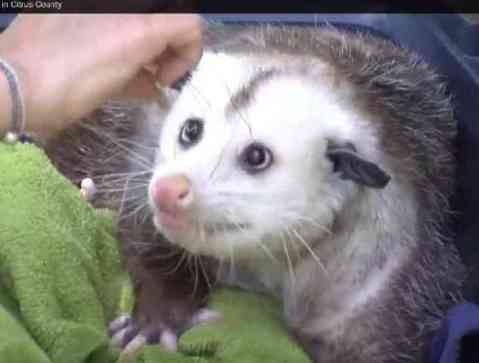 Lea Murray couldn't bear to let the little marsupial be killed, even though he suffers from a metabolic bone disease. She decided to make him a part of her Tampa Bay, Florida, home -- and her heart. The original plan had been to rehabilitate Barley and return him to the wild, but she fell in love with him.

You can't just take a possum as a pet in Florida. Murray had to get a special permit from the Florida Fish and Wildlife Conservation Commission. The permit requires specific circumstances and care to make sure that the animal is given a proper home. 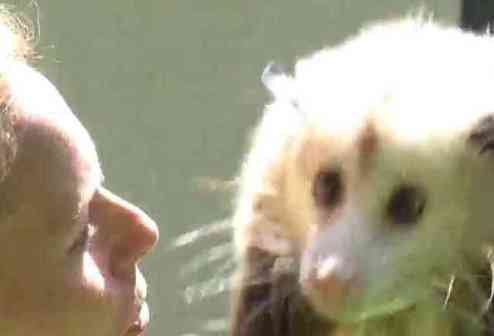 Barley and his Human Mom, Lea Murray (You Tube Image)Now Barley goes to work with Murray every day. She takes him for walks in a stroller and feeds him some of his favorite foods -- like cottage cheese. He sleeps in her bed at night like any cat or dog. Murray says that he is the best pet she has ever had. He is house broken and never gets out of hand making messes or chewing up anything.

Murray warns others away from trying to turn a possum into a pet though. She points out that Barley is no average possum. He came to her as a baby and has never really lived as an opossum. The only life he has known is his life with Murray. The other half of this circumstance is that she is professionally trained to deal with animals.

In February Barley celebrated his first birthday with a big public bash to raise funds to help other animals in his situation get the help they need. Barley is so popular that he has his own Facebook page so that you can check on how he's doing whenever you want.

PetsLady's Pick: Beautiful Jingle Horse Of The Day
Holy Quack! There are a Lot of Ducks in the Animal Video of the Day!!!!