The popular Lake Lou Yeager has become strangely empty of activity ever since a fisherman caught an exotic pacu
fish on June 7. A second fish was reportedly sighted in the lake two
weeks later. The fish, which is related to the piranha, is reputed to
have killed a couple of men in Papua New Guinea who bled to death after their testicles were bitten off. 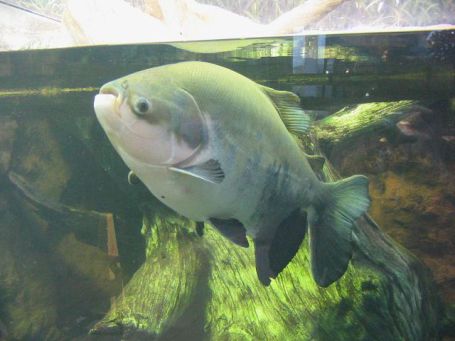 Pacu Fish at the Shedd Aquarium (Photo: Omnitarian/GNU via Wikimedia)

In an incident in Ft. Worth, Texas, a 24-inch pacu jumped out of his tank and bit the testicles off of its owner. In this case, the man's genitals were surgically repaired, minus the left one.

The fish, originally from South America, has been sold for aquarium in the U.S. In Papua New Guinea the fish was introduced into the wild to increase fishing stock.

It is assumed that the pacu now living in the lake were dumped illegally. Authorities are anxious to keep the public from panicking and advise that the fish's normal food supply is largely things like aquatic vegetation and snails. In an unintentional pun, the original story also listed one of the foods that the fish traditionally eat as "nuts."

Some patrons of the lake are taking a much more laid back, I'll-believe-it-when-I-see-it approach to the pacu. It is hoped that they will be ready to "play ball" should that time arrive.

A Roadside Memorial For Fish?

Get An Angler On Your Late Night Reading