Beluga whales are one of the few species of whale still kept in
captivity in aquariums and water parks. They are a big draw for these
venues as visitors clamor to see the gentle giants. Working as a trainer
with whales can be a dangerous business as in 2010 when a Sea World
employee was killed by a killer whale. 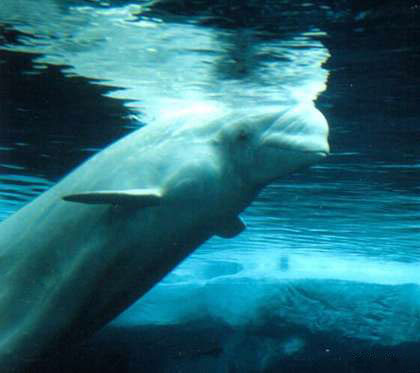 Beluga Whale (Photo by Eva Hejda/Creative Commons via Wikimedia)That is not always the way it
goes. One young woman in China owes her life to a captive Beluga
whale.

Back in 2009, Yang Yun was entered in a free diving competition at the Polar Land Aquarium in Harbin, a city in north east China. She was hoping to earn a job as a trainer working with the whales. She was one of seven finalists and performing a dive in icy water without any diving gear. She was to go as deep as she could before resurfacing.

With her breath gone she turned to resurface when tragedy struck. Her legs suddenly cramped up and she couldn't begin her ascent. Instead she began to sink. She was certain that this was the end -- until she felt a gentle pressure on her legs.

The two Beluga whales, Mila and Nicola, in the tank had sensed something was wrong and came swimming to see what was going on. Mila grabbed hold of Yang by one ankle and started pushing her back to the surface. Fortunately Belugas have only tiny teeth so that the young woman was not injured by her rescuer. 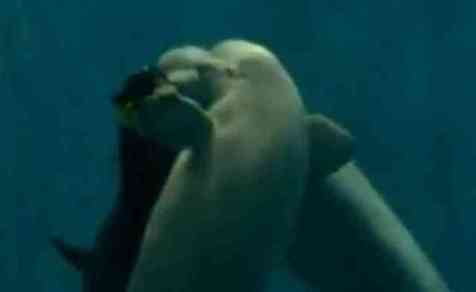 A Diver with Mila and Nicola (You Tube Image)Officials judging the competition watched in amazement as the motionless body began moving upward. One of the officials commented afterward the Mila was a very sensitive animal used to working with humans.

Since whales need to resurface for air and can also drown, it may have been a natural instinct to help a fellow mammal to get to the surface in an emergency.

Regardless of whether it was instinct or kindness, once Yang was safely on dry land it was finally time to say that she had really had one whale of a time -- and a truly uplifting experience!

Can Animals Transfer Their Lifetime Experience To Their Next Generation?
Twin Mutts From Another Mother, Gone Viral