Studies have shown that pigs are some of the smartest animals on the
planet, even more so than cats or dogs. For Jo Ann Altsman of Beaver
Falls, Pennsylvania, that is a very good thing. She had taken her pet
pot-bellied pig Lulu on vacation with her to her trailer on Presque Isle back in
1998. Things weren't going as 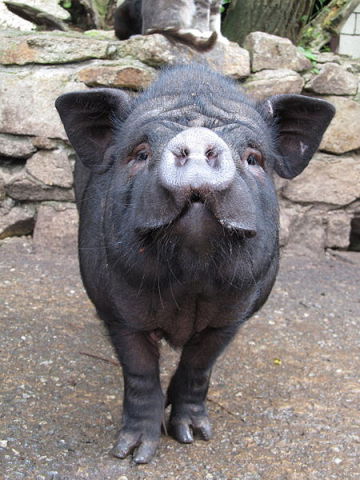 Pot-Bellied Pig (Photo by Donar Reiskoffer/Creative Commons via Wikimedia) planned when Altsman suffered a
heart attack. Thanks to the quick thinking of Lulu, Altsman survived to
tell the tale.

When Altsman collapsed on the bedroom floor Lulu cried for a moment and then rushed out of the room. She continued outside the trailer in search of help a la Lassie. This was no easy task since she had to squeeze out the dog door and open a gate. Though she had never been outsider the fenced yard without being on a leash, she persevered and continued into the street. When a car was finally coming she waddled out into the road and laid down in a dramatic gesture right on cue like any good animal movie actor. The first car did not stop, but drove around, claiming later that he didn't know what that animal was and was afraid. Fortunately the second driver was not so easily put off.

The motorist stopped, shocked at the sight of a Vietnamese pot-bellied pig lounging in the street.  Lulu got up and led the shocked driver to the trailer. At the door he called out that the pig was in distress. Altsman called back that it was she who was in distress. Help arrived shortly thereafter. Altsman's ordeal lasted 45 minutes. Doctor's estimated that if her rescue had taken just 15 minutes longer she might well have died. 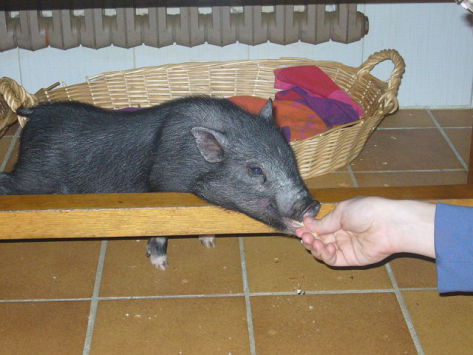 Pot-Bellied Pig (Photo by Drow_male/Creative Commons via Wikimedia)While all this had been going on Altsman's dog, Bear, an American Eskimo dog, stood and barked at her and broke a window. Altsman was repeatedly calling for help herself. During Lulu's attempt to find help she returned several times to check on Altsman and then returned to her quest.

They discovered later that Lulu had cut her stomach going in and out the dog door. It was her door too, but Altsman's husband had been unable to keep up enlarging it as Lulu went from 4 pounds to 150 pounds in her first year. As a reward Lulu was given a jelly doughnut which was thoroughly enjoyed.

Lulu actually belonged to the Altsman's daughter Jackie. They had been pig-sitting for her while she went on vacation. Fortunately for Altsman, once Jackie returned from vacation she had kept putting off picking up the pig.

One could say this Lulu gave a whole new meaning to the term "road hog."