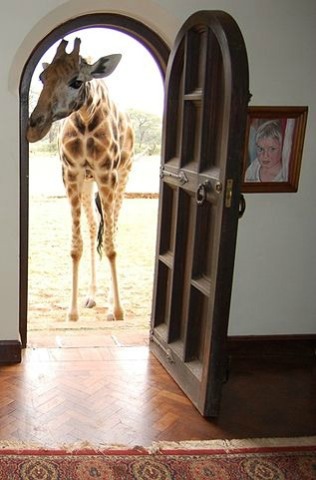 Animal Friendly Giraffe Manor in Nairobi, Kenya: Image via Flickr by: Push the buttonWhile pet friendly hotels and motels are on the rise, there are a few boutique facilities that have taken the concept of welcoming animals within the confines of their lodgings to a whole other level. They’re animal friendly with a twist: you leave your pets at home and they supply the animal companionship. If you’re wondering why you would want to do that, ask yourself what if you could stay at a first-rate hotel where exotic animals roam the grounds and the halls freely? That's what you'd find if you were to stay at either of two extremely unusual hotels in Africa where visitors come face to face with giraffes and elephants saunter leisurely through the lobby. With accommodations like these, who needs a jeep safari?

Constructed in 1932, picturesque Giraffe Manor was modeled after a Scottish hunting lodge and originally sat on 150 acres of untamed land in the wilds of Nairobi, Kenya. Commissioned by Mackintosh Toffee heir Sir David Duncan, the quaint estate was purchased in the mid '70s by American conservationists who soon turned it into a sanctuary for endangered Rothschild giraffes. It wasn't until 1983 that it was opened to the public as a hotel. In 2009, the estate became part of The Safari Collection, a unique group of luxury lodges and camps in Kenya offering one-of-a-kind vacation experiences for wildlife lovers.


As beautiful as the façade and interior of the manor house are, it’s the herd of free-roaming giraffes that make it such a unique and exclusive destination. It’s one of the only places in the world where you’re likely to be greeted by a giraffe peering in your window looking for a tasty treat. The full-time residents are often seen in the morning and evenings poking their heads through upper and lower windows before wandering back off to the forest. Guests are allowed to feed the Rothschild giraffes, providing for amazing photo opportunities and life-long memories.

They say that elephants never forget, and here's a case in point. Many years ago in Zambia a group of developers decided to build a luxury resort on the edge of a mango grove in South Luangwa National Park. Little did they know at the time that the mangoes were a favorite of one particular pachyderm family who visited the area every year when the fruit was ripe for the picking. The following November the staff and guests at the Mfuwe Lodge were startled when the elephants showed up — unannounced, of course — and walked straight through the lobby to reach their beloved grove of mango trees.


Apparently, elephants don’t do detours and the hotel was built directly in the path of the route to one of their favorite foods, so they just marched on through. Interestingly enough, this is the only herd that does come through, and they come and go as they please. The mango season lasts a mere four to six weeks, so if your curiosity is piqued and you want to experience the elephants’ yearly mango pilgrimage, late November through December is when you’ll need to arrive. The elephants get reasonably close to the staff, who are used to them by now, but guests are asked to keep a respectful distance for obvious safety reasons. Both the Manor and the Lodge have nearby safari excursions available, if it turns out herds of wild elephants and giraffes just aren't enough.

Being separated from pets while on vacation can be stressful, but unique animal friendly hotels like these offer travelers abroad a wonderful alternative for spending time with friends of the four-legged variety while on a trip. And these aren't the only pet friendly hotels and inns with a twist out there. For more articles on or ideas for getaways like this, look to me on PetsLady.

Denver Zoo Rhinoceros Bites Woman, Sends Her To Hospital
Snowy Owls Are Migrating To United States This Winter!
Dolphin Tale’s Aquarium Says NO To ‘Show Must Go On’
Do You Know About America’s Monkey Island?
Comments