American Bombay Cat - Predatory Panther Or A Priss Of A Puss? [Video]

With a sleek patent-leather-like black coat, a muscular build and tapered gold or copper-colored eyes that emit a 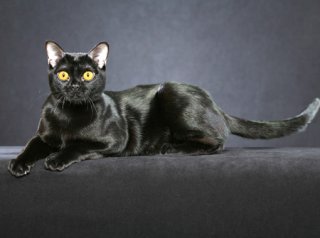 piercing glaze, it's no surprise that the American Bombay cat is often mistaken for a Panther kitten. However, despite its threatening facade, this feline would much rather curl up in your lap than join its distant big cat cousins in the wild.

Perhaps why this cat's look is so reminiscent of a panther is due to the fact that the Bombay is considered a designer-cat. Dating back to 1958, Nikki Horner a prominent breeder not only crossbred an American short-hair and Burmese to assimilate the resemblance but also named her new-found cat breed after the black leopard of Bombay, India.

Over the course of the next 18 years of breeding, in 1976 Horner was honored by receiving the Cat Fancier's Association (CFA) "championship" status impressing judges owners and cat owners alike.

Dissimilar to the big cats of the wild, the American Bombay is as domesticated as they come. They're exceedingly personable and posses a high level of intelligence. They're known to possess a Joie de Vivre and like

to engage with their owners. Like the Burmese, this breed adapts easily to its living quarters. It's one quirk - if we are to call it that - is that also like the Burmese - they tend to prefer to be the "top cat" in the household.

e playing, the Bombay also enjoys its downtime. They will also respond to a generous amount of affection and is often seen returning similar gestures in kind. Bedtime will often find these cats snuggling up in your lap or curling up under a blanket.

Size-wise, the American Bombay is smaller than most other breeds, where males might weigh less than 11 pounds fully-grown and females only 6 to 9 pounds. But while diminutive, its slightly longer body adds to its panther-like appearance.

Maturity arrives sooner than other species. While a male might not reach his full physical size until he's two years-old, he often reaches sexual maturity within 6 months, when it's been known for a male to sire its first litter.

From a grooming perspective, Bombays require very little. Petting will keep the coat shiny and free of dead hair. A rubber brush can be used for excessive shedding, and a nutritionally-complete food will add gloss to the coat and fuel for the cat's energy.

So if this post has intrigued you enough to want to seek out your very own Bombay, check at the CatsNow.com website where you'll find hundreds to choose from located in different parts of the U.S. As far as cost, these cats because of their very unique qualities are not inexpensive and according to Australia's pet enthusiasts' Burke's Backyard, Bombays have been priced as high as $500.

While it's referred to as superstitious to have a black cat cross your path, I think when it comes to the American Bombay -- you might want to lay that misconception to rest.