When Gloomy Bear Meets Hello Kitty, There Will Be Blood

Having exhausted every avenue of cuteness, Japanese character company Sanrio is sending mouthless ambassador of sweetness Hello Kitty into a very bad neighborhood. Strapya World's Hello Kitty & Gloomy Bear cellphone charm is the result. The tag line for the combo character, "World's most violent but lovely Kitty", perfectly illustrates the confusion Japanese marketers are having when trying to sell HK's scary new direction. 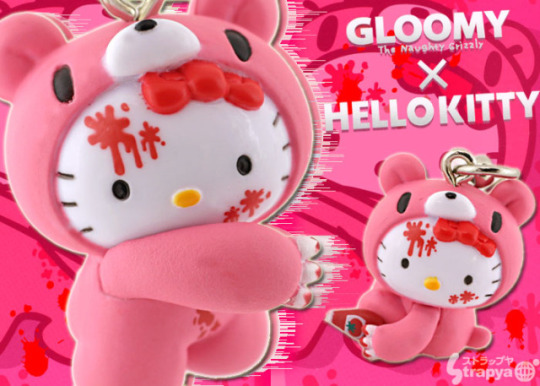 Well, what have we here... either Kitty's wearing a bear costume or she's being eaten by a ravenous pink bear. Sorry folks, it's the latter: Gloomy bear may be pink but it's all downhill from there.

Created by Japanese graphic designer Mori Chack, 6-ft tall Gloomy Bear is, according to this Wikipedia entry, "an antithesis to the excessively cute products produced by Disney, Sanrio's Hello Kitty, and other companies. Mori Chack believes that humans and animals are incompatible, and an animal is wild by nature. This is expressed most pronouncedly by the Gloomy Bear, which is often shown blood stained and striking humans." Yikes!

Curiously, Sanrio seems to have signed off on this very unusual collaboration as both  Sanrio's and Mori Chack's copyright notifications are listed at Strapya's website. Sort of like PETA hooking up with KFC, but stranger things have happened... and this IS Japan, after all, where strange things happen as a matter of course.

Strapya sells the Hello Kitty x Gloomy Bear cellphone charms in two versions: one has the bear's razor-sharp claws extending in attack mode and the other features the bear clutching a bottle of ketchup. As if we're supposed to believe the "blood spatters" on Hello Kitty's face are just misplaced tomato sauce. If only they were!

For Your Chicken Of A Kitchen
It's The Cat's Meow! Cool Cat Mug With Cat Spoon
This Valentine Gift Runs Cold And Hot