Having been a theater-goer for both 'War Horse' on Broadway and Steven Spielberg's movie adaptation, I was curious to learn if military horses had seen their day or whether they were still vital for certain types of military missions. Certainly when President Obama used "horses and bayonets" as a put-down line to show how his opponent Mitt Romney was lacking from a strategic defense standpoint, it suggested that war horses were a thing of the past.

However, upon further research, I uncovered many instances where horses are still integral to military maneuvers. Caisson horses, for instance which are used mainly for ceremonial events might one day serve our current president proudly. Caisson horses, after all perform in the funeral processions of former presidents, where teams of them pull caissons carrying the casket of the departed -- most notably for President Ronald Reagan. June 9, 2004. 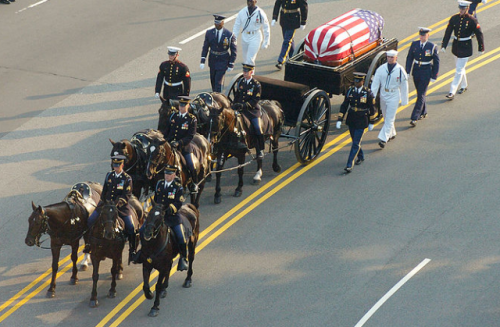 President Ronald Reagan's Funeral Procession
As far as combat is concerned, horses were used in the invasion of Afghanistan in 2001, when Special Operations soldiers rode them into combat with the Northern Alliance, against the Taliban. It was the first time since 1942 that horses had been used in combat. There's a 16-foot tall statue commemorating the Horse Soldiers of Afghanistan, titled, "De Oppresso Liber" at the 9/11 Memorial site in New York City. 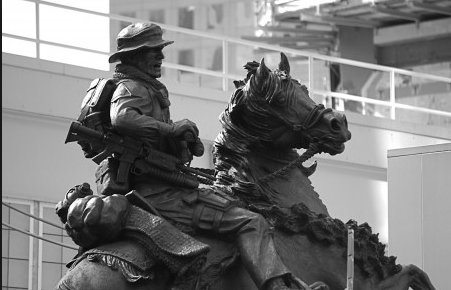 De Oppresso Liber at 9/11 Memorial, NYC
The New York Times bestselling author Doug Stanton dedicated an entire book to these horses, titled, "Horse Soldiers: The Extraordinary Story of a Band of US Soldiers Who Rode to Victory in Afghanistan." It's a dramatic account of that small band of Special Forces soldiers who secretly entered Afghanistan following

9/11 and rode to war on horses against the Taliban. Outnumbered forty to one, they pursued the enemy army across the mountainous Afghanistan terrain and, after a series of intense battles, captured the city of Mazar-i-Sharif, which was strategically essential in defeating the enemy.

Horses are also integral to post-war assistance.  Called 'animal therapy' soldiers returning from Iraq and Afghanistan have received this kind of help. While a lot has been done in pairing dogs and returning vets with Post Traumatic Stress Disorder (PTSD), the treatment has also seen positive results when patients are aided by trained horses.

Horses are remarkable healers in this regard. Anyone who's taken a trail ride and been told to relax because the horse perceives and reacts to their emotional state knows that there is a symbiotic relationship between man and the horse. In fact, horses don’t simply react -- instead they reflect the mood of the person handling them. If the human’s mood is positive and assured, the horse will mimic those emotions.

Conversely, if the human’s attitude is negative, the horse will adopt a negative mood. This can be helpful for the PTSD patient as it allows him or her to recognize how their own attitudes affect those around them. Many treatment centers use equine-assisted therapy to treat veterans today through this type of equine-assisted psychotherapy.

So, yes while Obama was correct in pointing out that horses might not be vital to military incursions as they were in the past, it's important to commemorate the important roles these fine animals played during the last 100 years of military strife.

Here's one of the 14 horses that portrayed the now-famous "Joey" in War Horse, the movie, as he takes a bow in homage to all those horses who went before -- and gets the full-blown red carpet treatment at the London Royal premiere of the movie, January 8, 2012. No anachronism here -- as this fine horse fits right in.