Cat photography is big in Japan, land of cat bloggers and cat cafes - but getting the cute li'l kitties to look photogenic is a real chore. To save you the shame of making cat sounds to attract your furry subject's attention, the Shironeko (White Cat) Camera and the similar Nya Nya Holga (Orange Cat) camera from Superheadz feature a sound chip that plays a series of typical cat noises every time you press the special button. 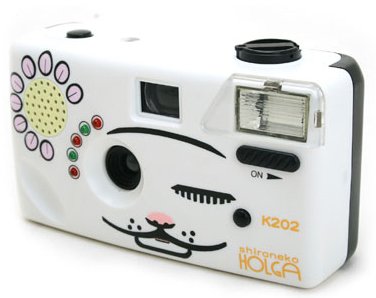 This short video of someone using the Superheadz Holga K202 Cat Camera features someone taking a picture of their pet Yorkie dog, who's wearing a dress for some reason. The flash-equipped camera also works well when photographing dogs, babies and drunks (not necessarily in that order) and is a "Holga" camera, which means the produced prints are of low quality as a matter of design. 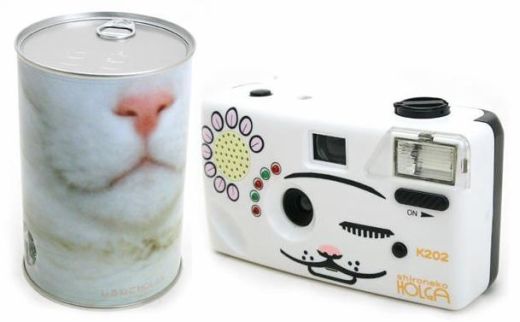 The cheap plastic meniscus lens and light-porous construction add odd effects to the photos such as vignetting and blurring. The somewhat surrealistic effects are sought after by some professional photographers who use Holga cameras by choice, but they also work well when snapping pics of kitty cats. 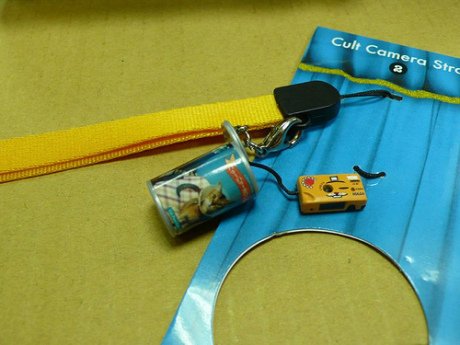 The Superheadz Holga K202 Cat Camera takes 35mm film (ISO 200 through 400) and requires 2 AA batteries. In a triumph of packaging that makes up for the silliness of the cat noises, the camera comes in a can that you can use afterwards for storing your kitty treats. You also get a cellphone strap and a pair of Cat Camera charms. (via Notilicious)