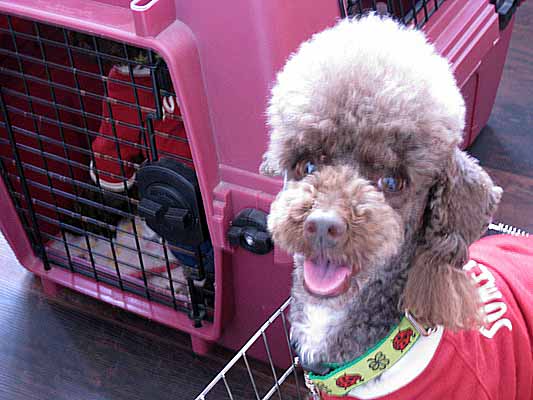 Think “police dog” and the images that come to mind are snarling Doberman Pinschers and intimidating German Shepherds. As any policeman knows, however, there's much more to police work than running down criminals and the big barkers aren't ideal for other essential duties.

That's where Mochi comes in... on tiny paws, deserving of a round of applause. The cute gray-brown Toy Poodle (right) recently passed his police dog exam and becomes the third Toy Poodle to join a Japanese police organization, though Mochi is the first of his breed to specialize in sniffing out drugs, explosives and buried accident victims.

Here's a video showing the cutely-coiffed Mochi being put through his paces on the police dog training course:

A change of policy at Japan's police agencies has recognized the need for smaller breeds thought previously to be unsuitable. Small dogs can fit into tight spaces, for example, and they showed their worth following the 2011 earthquake and tsunami sniffing out victims trapped in collapsed buildings.

Two other Toy Poodles named “Karin” and “Fuga” have been employed by the police force in Tottori Prefecture since last year, in the process becoming minor celebrities in a land where animal train station masters have gained a devoted following. Other prefectures are jumping on the Kute K9 bandwagon: a Miniature Schnauzer named “Kuu” has spent the past several years working for the Wakayama police force in Wakayama.

Other small Japanese police dogs include a long-haired Chihuahua named “Momo” and a Beagle named “Ginny,” though wouldn't “Snoopy” be an ideal name for a police dog? But back to Mochi: six months of dedicated training has paid off for the under-4-pound, 4-year-old former therapy dog. All this is no surprise to Naomi Yasuda, Mochi's owner, who proudly states that “Mochi has always been at the top of his class, in training school. I just wanted to find a way for him to help others.”

Now he'll get his chance: Kyoto police have officially confirmed that Mochi will be used on a “case-by-case” basis over the next year. (via VetStreet, ABC News, and CHOCOrin Diary)