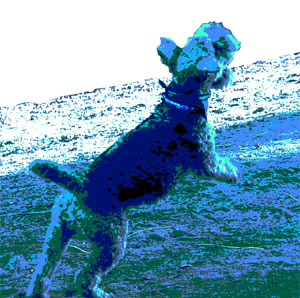 There were observable symptoms of joint and muscle weakness in my dog's legs that began when he was about 12 years old.  He had always been active; he loved to fence race against the bigger dogs in the park and to do all kinds of jumps through his Hula Hoop!

But he had become slow and very careful, particularly when lying down or getting up from a lie down position.  In the last few months, his movements became more labored and even his walk appeared strained. I researched a variety of natural remedies for joint health; natural because my dog is allergic to prednisone which is an artificial steroid ingredient in almost every prescription drug for dogs.

Customers found the Synovi G3 Soft Chews very effective at restoring mobility in their dogs and some vets even recommended the product to them, so I ordered a little barrel and... I am not sorry.  I would say that I'm thrilled with the results, but being cynical as well as superstitious, I'll neutralize my comments. 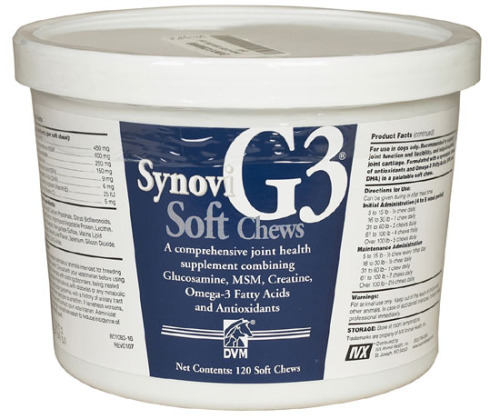 What surprised me is that results were visible.  When you take a prescription medicine, you have to admit that you can see and/or feel a difference soon after you take them.   But personally, I have not experienced noticeable difference in my health from taking any vitamin or food supplement.  I just do it, assuming that it's doing some kind of good.

I suspect the visible success that the Synovi G3 promotes has more to do with the source of its minerals and the specific formula than it does with the specific contents, which happen to be: Glucosamine HCl,
Methylsulfonylmethane,
Creatine Monohydrate,
Perna Canaliculus,
Eicosapentaenoic Acid,
Docosahexaenoic Acid,
Alpha Tocopheryl Acetate (Vitamin E),
Ascorbic Acid (Vitamin C).  No, I don't know what the ingredients are, but DVM Pharmaceuticals, the manufacturer, describes the Synovi G3 Soft Chews as a "Comprehensive
joint formulation providing the highest concentrations of Glucosamine,
Methylsulfonylmethane, Creatine and glycosaminoglycans. Fortified with
antioxidants and Omega-3 Fatty Acids. Supports joint function and
flexibility, and helps strengthen joint cartilage. Formulated in moist
soft chews for enhanced palatability."

My dog doesn't swallow the 'palatability' part.  Although most dogs seem to eat the Soft Chews willingly (They smell like chocolate to me!), mine will not, so I either have to wrap them in cheese, smash them up with peanut butter, or find some other desirable concoction to hide them in.  They do crumble easily, so you can even scramble them with an egg white.

Although my pup has been taking the Synovi G3 Soft Chews for a month, I saw a difference in his gait within just a few days and I began taking him to the dog park a few times a week, where he runs around just like he used to, socializing with other dogs - but no fence running.

It is also somewhat easier for him to lie down and stand, although he could use a carpet under him to provide some traction. I definitely think that as your dog is feeling stronger, you should
provide more exercise for her, so she can regain some of her strength
and test her joints.

The most important thing I've noticed is that my dog's temperament is back to being alert and happy, so I figured he doesn't hurt any more.  He has even returned to his cornball antics to get attention.  I love having him back!

Synovi G3 is available in Soft Chews and other compositions for dogs.  DVM Pharmaceuticals also makes Synovi G3 for horses.