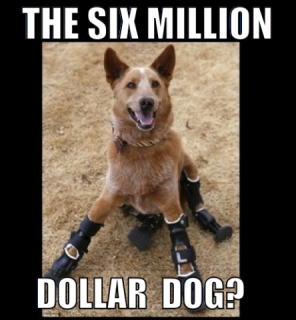 operative? The TV Show, The Six Million Dollar Man became an instant TV hit, positioning actor Lee Majors as pop culture icon of the 1970s and spawned a good number of spin-offs including The Bionic Woman.

Well, flash-forward to the 21st Century and it looks like bionic technology is becoming a reality. But instead of going all-Robo with a man, it’s being tested out on the canine species.

Naki’o, a mixed breed dog from Nebraska has become the first dog ever to be fitted with four prosthetic limbs. This orthopedic advancement was perfected by the Denver, CO firm OrthoPets, which specializes in artificial limbs for animals.

As the story goes, when this pooch was abandoned in a cellar as a puppy, he sadly lost his limbs and part of his tail due to frostbite. But thanks to a successful operation that provided him with fully-functional bionic paws, he's comfortably up on all fours! 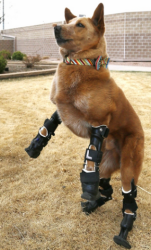 While not six million dollars, the actual cost of the two back leg prosthetics cost on upwards of $3500. Naki’o was rescued by veterinarian assistant Christie Pace who put together a fundraiser to raise those funds. Then based on that successful procedure, OrthoPets opted to do Naki'o's  front limbs free of charge.

“When we saw how good he was doing with his back leg prosthetics and how he was struggling to use his front legs it was very simple to say, “we gotta keep with him,” said owner of OrthoPets Martin Kaufmann.

Kaufmann started his business in 2007 to design and customize prosthetic limbs and orthotic braces for pets. However, Naki’o’s needing for four limbs did present certain challenges. “We didn’t want to add too many variables all at once,” said Martin. “Naki’o’s legs were very uneven and his non-surgical amputation had left very sharp ends in his residual limbs.”

Initially they tried a prosthetic without revising Naki’o’s bone structure, but that didn’t appear to be a long-term solution.

“We were able to give Naki’o comfort, a more normal body alignment and even out the length of his legs. The beauty of working with animals is that they will give you an immediate and honest response. If they feel better, they will use it more.”

A few months after the second rear prosthetic device was in place, they began fitting Naki’o with devices for his front legs and today we’re happy to report he can function just like any other dog.

Check out this heartwarming ABC Good Morning America video that highlights Naki’o’s journey from crippled pup to one happy frolicking bionic dog who can run and roam freely!

Kitties! Start Your Engines! The Animal Video Of The Day!!!

Cats in Tanks! Run! The Destructive Animal Video of the Day!!!
Comments