If one white deer is rare, the odds of a pair showing up are, well, odd to say the least. Unlikely or not, the pair of snow white deer spotted in a London, Ontario backyard brightened up one homeowner's morning and, if folk legends can believed, just may have brought him good luck. 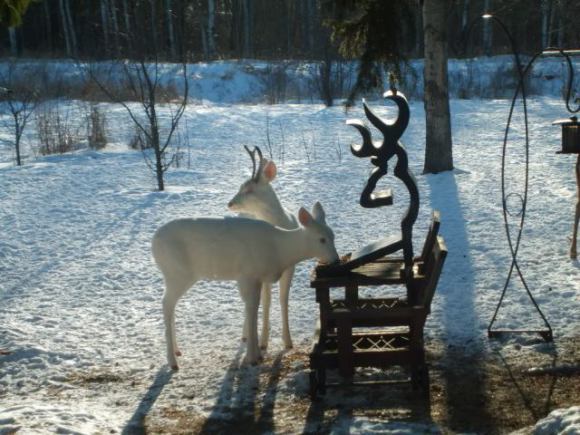 Early one day in the merry merry month of May, David Baert chanced to look out his window and was greeted by a sight few others have seen: a pair of young deer decked out in brilliant white from head to tail. “I thought it was very unusual,” said Baert, who reckons the deer spent about 10 minutes in his yard. “You don't normally see animals like that.”

That's an understatement, as only about one in 10,000 deer are born pure white. According to Ben Hindmarsh, a fish and wildlife specialist with the Ontario (canada) Ministry of Natural Resources who studied photos of the deer taken by Baert, the deer were males and approximately one year old. It's likely they're twin brothers, and there aren't enough zeros available to calculate those odds.

White deer occur as a result of two genetic conditions: albinism and leucism. Hindmarsh speculates the pair of young bucks were leucistic as their eyes weren't red. While albinos suffer from a complete lack of the pigment melanin, leucistic creatures are characterized by a reduction in all types of skin pigment. The pigmentation loss doesn't affect the eyes, however, as their pigmentation “programming” derives from a different set of genes.

As for the rare pair of white deer who visited David Baert's farm in west London, Ontario, they've moved on to greener pastures. If their reputation for symbolizing good luck, the spirit world and peace has any basis in reality, however, Baert would be advised to invest in a lottery ticket or two. (via Toronto Sun and Canadian Content, images are examples only and do not depict the subject deer)

Scent Hounds Are All Ears
Comments