Raccoons As Pets? Just Say No

For most of us in North America, we find ourselves living cheek by jowl with raccoons. These ubiquitous little bandits appear cute and cuddly when viewed on a National Geographic special, or in cartoons. This can lead people to think that they would make a fun exotic pet to impress friends and relations. However, anyone who knows them well in the wild also knows that they are not cut out to be pets. 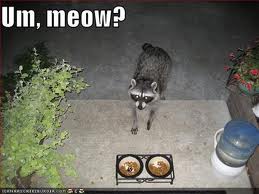 My mother, Shirley Van Cleave, had a running battle for many years with the raccoons around her Boulder, Colorado home -- more specifically IN her home. They were regular visitors through the cat entrance. Their nocturnal visits generally left the kitchen a shambles and the contents of her purse strewn around the living room. One evening, upon returning home, she walked down the hall and glanced perfunctorily into the spare bedroom. There, in the two cat beds she had set up under the sunny window, were raccoons. Not just curled up, but lounging comfortably with excessive flair, as though trying the life of a pampered pet on for size. When she stopped in shock they turned at looked at her. She said that she was sure that they were trying to convince her to ditch the cats and take them in instead.

Raccoons will eat just about anything. That is why they have adapted so well to the urban landscape. We set trash can buffets out for them that are open all night. We landscape with goldfish ponds where they can pick up sushi on the run. We are raccoon enablers of the highest order.

Raccoons are particularly fond of eating pet food. I found this out while feeding a litter of feral kittens on my patio. At night the local raccoons started showing up, as many as a dozen at a time, to clean up the leftovers. They would quickly turn into a rabid bunch of hockey players, brawling over everything. I don't speak raccoon, but I could tell that the language they were using should not be repeated in polite society. I quickly learned to bring all the food in before dark to avoid a raccoon apocalypse.

Where I live my trash goes into a community dumpster down the street. One evening I tossed a bag into said dumpster and heard a squeal. I stood on tip toes to peek in. At the same time the raccoon that had been rummaging did the same to peek out. We stared at each other nose to nose in surprise, making the couple strolling by  laugh.

There are many warm and wonderful raccoon stories out there. Aside from being mischeivous and high maintenance, raccoons are still wild animals. They carry diseases such as rabies. Many cities have laws against the keeping of certain exotic pets.  You may also have trouble finding a vet to treat one. I have also noticed that there isn't an overabundance of raccoon kibble available at the grocery store.

The people in the south may have it right. They often view raccoons as a tasty main course for dinner, rather than a bit of pesky wildlife. Tasty raccoon recipes abound. Although I have to admit, the thought makes me a bit green, and that isn't a good color for me.

Just last week, in Merritt Island, Florida, two raccoon attacks prompted local officials to close a local park. One attack was on a woman eating her lunch, possibly for not being willing to share. Either that or she did share and the raccoon did not care for her menu choice. The other was an attack on a small child on the playground.

So, before you adopt a raccoon, think twice or you may find the little thief fishing through your aquarium looking for a between-meal snack. If you do ever choose to take a leap off this particular cliff, it is recommended that you get your new pet from a breeder, not from the wild. Better yet, make a symbolic raccoon adoption through the World Wildlife Fund. Or just you can get yourself an adorable Zhu Zhu Racoon for most of the fun and none of the pain.

Elephant Saves Young Girl From Thailand Tsunami
Dolphins Love Looking At Themselves -- The Animal Video of the Day!!!

PetsLady's Pick: Funny Mare And Foal Of The Day
Comments