Python Punk'd Passengers With Reptile Dysfunction In 'Snakes On A Cab'

Hailing a cab in NYC is a challenging task in and of itself - but once you get one to pick you up, the last thing 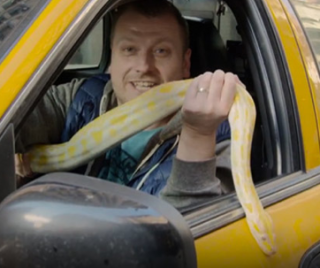 you're expecting is to share your ride with a

snake. In his book, "Follow That Car," author, comedian and sometimes cab driver, Jimmy Failla never warned the public in advance about having a giant 14-foot Burmese Python riding shot-gun.

Spoiler & X-rated Alert: While this video contains a tame snake, the reactions from the passengers includes some heaving cursing.

The city Taxi and Limousine Commission (TLC) and PETA of course blasted the comic for 'monumentally poor judgment" and threatened to revoke his TLC license.

Colleen O’Brien, senior director of communications at PETA, noted that: "snakes are

remarkable yet frequently misunderstood animals who have an acute sense of hearing. Being bombarded by shrieking passengers, slamming car doors, and threats of violence is extremely stressful for them.

Failla’s publicist, Chelsey Saatkamp told Gothamist that a licensed handler was present for the video and made sure the snake was relaxed throughout the shoot. Adding insult to injury - but laughable all  the same - she assured the public that this was not a hoax: "the snake was real and nothing was scripted." She also noted that releases had to be signed after each passenger left the cab.

She addressed PETA's accusations of mistreatment by asserting "the snake was handled with the utmost compassion and consideration by a licensed snake handler and the team took multiple shooting breaks to make sure the snake was relaxed."

"Neither the snake nor the passenger was in any danger,” she added.

Peta countered with, "surely a rubber snake tucked underneath the seat would have garnered similar—and certainly safer—reactions from unsuspecting passengers."

To give you some idea how pythons are capable of scaring just about anyone --  even when they aren't presented to you in a cab -- here's TV talk show host Chelsea Handler going off on the thought by just looking at one in a photograph.

But really, what's the big deal? What's all the fuss about? Failla did assure everyone in his video, it wasn't "a dangerous snake, (and that) most of the venom had been taken out of her!" Ba Dum Tssshhh!