There’s no denying it- Dinosaurs are awesome, and Safari Ltd. makes the best dino replicas in the business. This time I’ve got my hands on a trio of lesser known carnivorous dinosaurs that the artisans at Safari did an incredible job bringing to life: 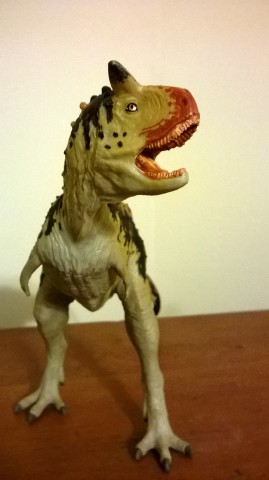 The only horned carnivorous dinosaur’s name literally translates to “Meat-Eating Bull,” and Safari made this tall, scaly brute quite intimidating. Some of the South American carnotaurus model’s most prominent features include its hefty weight, tall height, bumpy crocodile-like scales, reflective golden eyes and its patchy “camo-like” skin patterns. The most surprising thing about this model was just how tiny its arms are, but its sub-tyrannosaurus arms perfectly match the only carnotaurus skeleton on record, and that just shows how committed to detail Safari is to their craft. 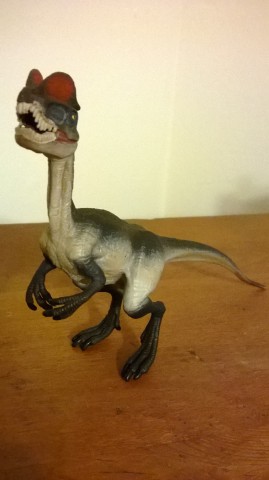 Made famous for its appearance in the hit film “Jurassic Park,” the real dilophosaurus was taller and bulkier than the venom-spewing frog-dino mutant hybrid in the movie. While we don’t know exactly why this species has a pair of crests on this top if its head, researchers have made an estimated guess that it was used to attract mates. Safari took that idea and ran with it by giving their dilophosaurus a set of crimson crests, as well as the most expressive face of any dinosaur in their collection. He’s happy to see you for dinner! 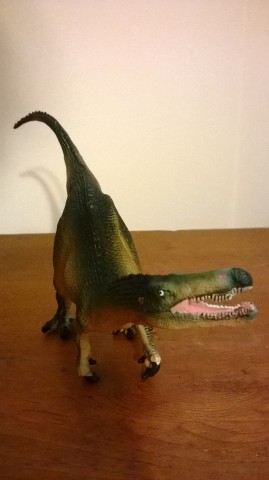 Finally, we have the brand-new suchomimus model released in December 2013! I’m glad that Safari went out of their way to remake a virtually unknown dinosaur species like this 40-foot long African behemoth, and it shows that their design team has only gotten better over the years. I am thrilled with the unique take on the crocodile-faced dinosaur’s hunched body, shiny teal back and huge hooked claws. Great job with baryonyx’s big brother, Safari! 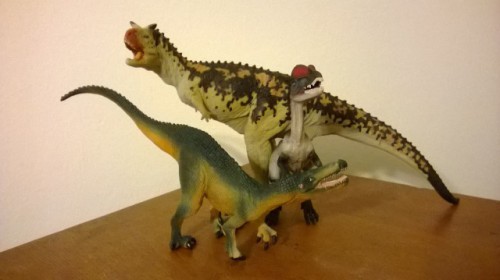 Once again, Safari hit the ball out of the park with their scientifically accurate, yet creatively positioned and colored, dinosaur models. Don’t forget that you can pick up carnotaurus, dilophosaurus, suchomimus and many more impressive Safari dinosaurs at Amazon and Safari’s homepage!