Firefighters in the Swiss canton of Basel were recently called out to rescue an ass stuck in a manhole... not that there's anything wrong with that, unless you're the donkey in question. 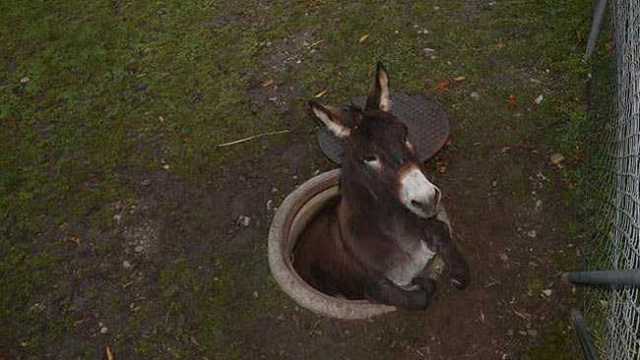 That would be Nilo, a “13-year-old ass” (hey, I'm just quoting the source!) who lives, works and plays at a children's petting zoo in the town of Pratteln.

On the night of November 1st, 2014, and for reasons yet to be determined, Nilo somehow escaped the confines of the zoo and began roaming around the adjacent playground. His flight to freedom was all too brief, however, when he inadvertently stepped into an open manhole. 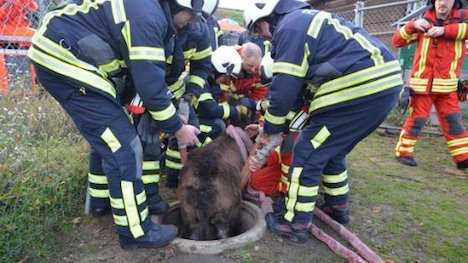 In any case, one Bruno Schneider happened to be passing by sometime after Nilo made his unfortunate misstep and alerted local police after discovering an agitated Nilo with only his head and forelegs above ground.

The police then contacted the fire department, who sent out a team of rescuers glad (possibly) they wouldn't be saving a scared cat from a tall tree for a change. 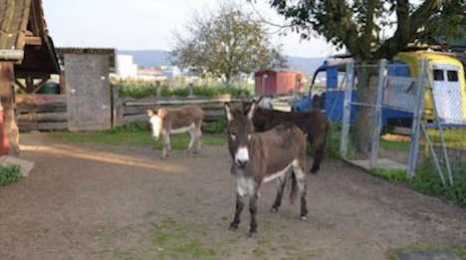 A concerted effort by the firefighters saw Nilo deftly extracted from his erstwhile prison largely unhurt physically, though his dignity must have been bruised. According to Basel Country firefighters' spokesman Meinrad Stoeklin, Nilo “was very cool,” both during and after his rescue.

While Nilo seems none the worse for wear now that he's safely ensconced behind the petting zoo's fence once more, the fallout from an “ongoing investigation” into both Nilo's escape and the circumstances that resulted in the manhole being left uncovered has yet to settle. (via The Local - Switzerland)

Busty Squirrel At Tokyo Zoo Drives The Internet Nuts
Is Your Dog A Genius? There's A New Way To Find Out
The Pet Food Recall & What To Do About It
Comments