Local law enforcement has an idea why the huge male lion was found in Kuwait's Bayan district, but everyone is stunned to learn how the big cat was recovered! 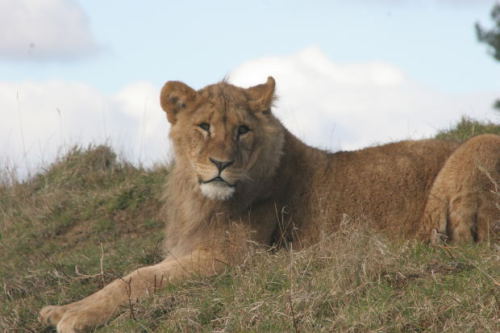 When a local Kuwaiti man discovered the young lion roaming around the market district, he somehow lured the beast into the back seat of his car. A member of the Kuwait police force said that the brave/crazy man “sat inside the car with the lion and then it became dangerous, so the citizen called police who came and took it from that car to their car…” Wait- Just having a lion in your backseat isn’t dangerous enough? At what point does the presence of a lion in your car escalate to “dangerous?”

Below is a video taken of the lion after he was transferred from the concerned citizen’s car to the police cruiser:

Even though owning a lion is illegal (and extremely dangerous) in Kuwait, police estimate that the escaped lion belonged to a rich person who was keeping the animal as a status symbol.  The lion’s owner has yet to be identified.

African lions are found throughout central and southern Africa, and can weigh between 420 to 500lbs as fully grown adults. Only male lions sport the species’ iconic manes, but they do not begin to develop until maturity. Lions are especially known to hunt a wide variety of hooved animals, including zebras, antelopes and buffalos, but the females of the pride do the lion’s share of the work.

Diver Almost Swallowed by Whale! The Close Call Animal Video of the Day!!!
The Force Is Strong With This Kitten -- The Animal Video Of The Day!!!

But Can He Quarterback? The Animal Video of the Day!!!

Wanna See Something Freaky? The Animal Video Of The Day!!!
Comments