An Otter Solution For Global Warming

Ever since Al Gore's "An Inconvenient Truth," categorized him as the Father of Global Warming, opposing viewpoints abound as to whether or not the Earth is any kind of real jeopardy? Our current presidential election battle has one candidate slamming the other for trying to "slow the rise of the oceans. . . and healing the planet," while others point to our reliance on fossils fuels and the build up of greenhouse gases as the beginning of the end.

One unsuspecting solution that might have a big influence on the carbon cycle is the sea otter. A new research study at the University of California-Santa Cruz  has revealed that sea otters play a big role in the activities of sea urchins and their predilection for kelp forests. 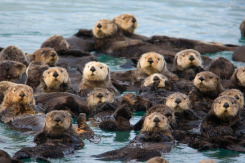 A thriving sea otter population can keep sea urchins in check which in turn will allow kelp forests to prosper.  The subsequent spreading kelp can then absorb as much as 12 times the amount of CO2 from the atmosphere when it is not consumed by the ravenous sea urchins.

University professors, Chris Wilmers and James Estes have combined 40 years of data on otters and kelp bloom from Vancouver Island to the western edge of Alaska's Aleutian Islands. His research team found that otters "undoubtedly have a strong influence" on the cycle of CO2 storage.

Warming of the climate system is unequivocal, and scientists are more than 90% certain that it is primarily caused by increasing concentrations of greenhouse gases produced by human activities such as the burning of fossil fuels and deforestation.

Comparing kelp density with otters and kelp density without otters, they found that "sea otters have a positive indirect effect on kelp biomass by preying on sea urchins, a kelp grazer." When otters are around, sea urchins hide in crevices and eat kelp scraps. With no otters around, they graze voraciously on living kelp.

The irony of these findings is that up till now, animals have been dismissed as an aid in curbing global warming. Wilmers stated, "right now, all the climate change models and proposed methods of sequestering carbon ignore animals. But animals the world over, working in different ways to influence the carbon cycle, might actually have a large impact."

The researchers admitted that increasing the otter population will not totally solve the increased levels of CO2 in the atmosphere but said it is important to know the effects animals can have on the atmosphere.

"If ecologists can get a better handle on what these impacts are, there might be opportunities for win-win conservation scenarios, whereby animal species are protected or enhances, and carbon gets sequestered," Wilmers said.

The full study will be released in the October issue of Frontiers in Ecology and the Environment. Maybe then Mr. Romney can blame the sea otters along with Barack Obama in wanting to slow the rise of the oceans to help save the planet.

Conservation
News Stories
Science
A Man Reunites with Gorilla -- The "Get Out a Tissue, 'Cause You're Gonna Cry" Animal Video of the Day!!!
Jasmine: Sweet Greyhound and Animal Sanctuary Surrogate Mother
Resurrection Biology For Those Who Think Extinction Stinks!