They say that love makes the world go 'round, and for an unlikely pair
in Myrtle Beach, South Carolina, that certainly seems to be true. Suryia
the orphaned orangutan and Roscoe the stray Blue Tick hound are the
best 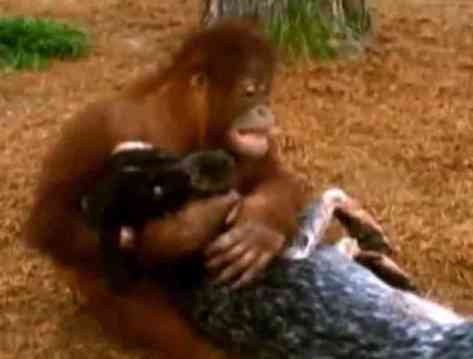 Roscoe and Suryia (You Tube Image) of friends, even though dogs tend to be afraid of non-human
primates. Their story of love and friendship sounds rather like a Disney
movie, except for one very important factor -- it's true.

Suryia first came to The Institute of Greatly Endangered and Rare Species in Myrtle Beach after he was orphaned. He was so despondent and depressed that the scientists there despaired over his ability to survive. Nothing they did seemed to help.

The one activity that Suryia did seem to enjoy was to accompany Dr. Bhagavan Antle, who founded the reserve, when he would take the elephant on a morning walk. The walk would take them through the woods 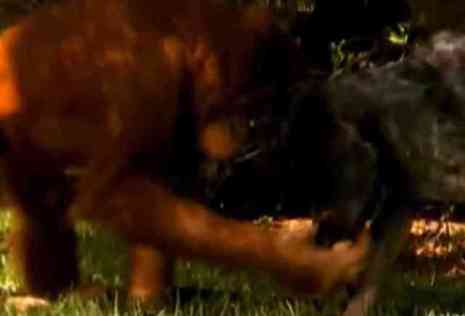 Roscoe and Suryia (You Tube Image)and a nearby neighborhood to the river where the elephant would enjoy a quick dip. One day as they got to the river a scrawny hound dog came out of the woods and stopped at the sight before him.

Suryia and the dog are looking and looking at each other as the elephant browses the water's edge. Suddenly Suryia jumped down and he and the dog ran into each other's arms like they had been missing each other for centuries. They immediately fell to hugging one another and rolling around on the ground ecstatically. Antle was amazed by the unusual sight.

When the time came for Antle and his friends to return to the reserve, he expected that the dog would return 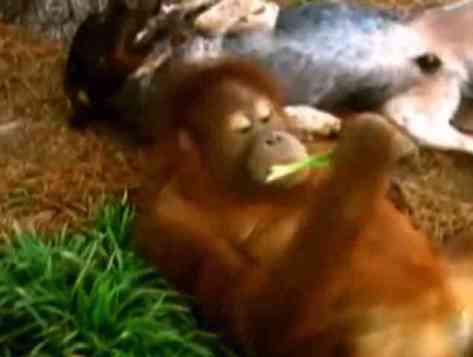 Roscoe and Suryia (You Tube Image) home or to his hunting pack, but the dog followed them back. Antle left the dog outside the gates but he worked his way in and promptly found the location of the orangutan cages where he and Suryia continued to play. Suryia started feeding the hungry dog some of his monkey biscuits.

After several rounds of shoving the dog out and having him sneak back in, Antle realized that he was beat, so he brought the dog into the family and named him Roscoe. Ever since then the two animals have continued to be the best of friends. The two get to spend time together every day. Suryia will even get hold of Roscoe's leash to take him for a walk around the grounds of the reserve. They also enjoy going for a swim in the pool together.

No one is worried about Suryia's survival these days. He is happy and healthy, and possibly the first orangutan ever to have adopted a stray hound dog. As for Roscoe -- it's good to be the dog!

The pair even have their own children's book that tells their story. It is available in hardback and on Kindle. To purchase a copy for your kids, click here.

Sources: Mail Online, A Letter to my Dog, National Geographic

It's Not Time to Wake Up -- The Sleeping Animal Video of the Day!!!
Pooping Pals To Please Papa
Give Your Garden A Wing And A Prayer
Wow! That's One Batty T-Shirt
Comments